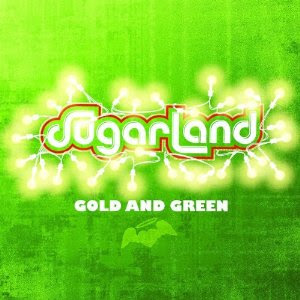 Gold and Green, the first full-length Christmas CD by the country duo Sugarland combines five new, original tracks with five more famous Christmas songs that they previously released only as a bonus disc on a now hard to obtain version of Sugarland's 2006 album, Enjoy the Ride. The limited edition was a Wal-Mart exclusive.

The covers include the religious carols "Silent Night" and "O Come, O Come, Emmanuel," the pop-classic "Winter Wonderland," and two songs normally aimed at kids, "Holly Jolly Christmas," sung by Kristian Bell and "Nuttin' For Christmas." All are nicely rendered and Jennifer Nettles voice carries the day on most of them. The last song is far less juvenile than usual because it's given a bright bluegrass arrangement that elevates it into an entirely different realm. It's nice to see the country stars reworking a tired old holiday tune by turning it into something unique.

The real gems here though are the Nettles - Bell originals. "City of Silver Dreams" is an almost melodramatic look at a rural girl's first visit to New York City at Christmas. The same can be said of "Coming Home" in which Nettles comes across more like an R & B diva than a country star. Bell's "Little Wood Guitar" is the tale of a little girl who received a guitar for Christmas. The other new tracks are the title song and "Maybe Baby (New Year's Day)."

Tom Jurek of All Music Guide has wrongly criticized Gold and Green as "an obvious, cloying exercise in marketing, and holds little artistic merit." He also wrote that it was "canned and pre-packaged." Jurek isn't the only one with harsh words for this disc, but I disagree. Even taking into consideration the subject matter, and the fact that this is a country music CD, none of the originals descend into sappiness, a too common occurrence plaguing the genre these days. Give Sugarland credit. They didn't fall into the usual Christmas album trap. They recorded something different and it's a surprise that paid off well.