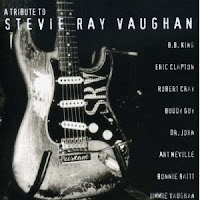 Five years after his brother's death Jimmie Vaughan organized a tribute concert to Stevie Ray that was broadcast on Austin City Limits on May 11, 1995 before it was released to the public on CD. In the CD's liner notes (it was also issued on DVD) Jimmie said, "Doing this has been in the back of my mind for a long time. But I wanted it to be far enough removed from Stevie's passing (August 26, 1990) that it could be a happy, celebratory event." Vaughan's timing was perfect because the concert became a giant blues party.

In addition to Double Trouble (Chris Layton, Tommy Shannon, and Reese Winans) everyone who played with Stevie on stage during his last concert just a few hours before he died was there: Eric Clapton, Buddy Guy, Robert Cray, and Jimmie. Also invited to pay their respects were Bonnie Raitt, B.B. King, and two keyboard players, Art Neville and Dr. John.

Your first reaction may be, "Why get this CD when you can get the real thing?" Yes, the "real thing" (Stevie Ray himself) was spectacular, but when blues all-stars and Hall-of-Famers of this caliber get together, and are properly inspired, sparks fly. Please continue to love the late Texan but don't be afraid to love this concert too.

Stevie Ray wouldn't have allowed a wake in his honor. He would have wanted his friends to party hardy and that is exactly what they did here. Raitt, the queen of the slide guitar, opened the set with a tasty version of "Pride and Joy" and brother Jimmie followed with a dandy "Texas Flood." King and Lucille nailed "Telephone Song" and Clapton honored Stevie Ray with "Ain't Gone 'N Give Up On Your Love." Buddy Guy's cover of "Long Way From Home" is perfect. Cray never sounded better on "Love Struck Baby," and for a change of pace Dr. John's keyboard's keyboards shined on "Cold Shot."

But the best was yet to come. Everyone took the stage for the final three songs. The whole gang broke into "Six Strings Down," a Jimmie Vaughan original written as a tribute to his brother and released on his Strange Pleasure CD. Everyone took a solo, and these bluesiest of blues greats played off of each other for the common musical good. The peace anthem, "Tick Tock" followed and this jam showed that there is nothing depressing about the blues. Finally, they closed with a 9 minute instrumental, "SRV Shuffle." Everyone was featured again and the party ended with the whole gang feeling high and happy, because even though Stevie Ray was no longer able to be on stage with his friends, his spirit and music still lives within them.

No genre of music is shared among musicians as completely as the blues because blues music comes from deep within the soul. It's why A Tribute To Stevie Ray Vaughan was an ego free event that made this concert so enjoyable.