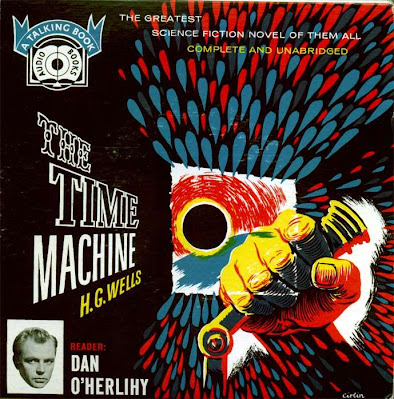 Have you ever heard of a long forgotten vinyl format, the 16 2/3 RPM record? They were half the speed of the 33 1/3 RPM albums that were the traditional standard for recorded music. Most record players in the 1950s and 1960s came with a speed setting to play these long forgotten discs that were considered novelties even during the years they were available.

Because most, but not all, 16s had big holes and were 7" in diameter many of them were mistaken for 45 RPMs and at that size the speed allowed for up to 20 minutes of playing time per side.﻿ However, there was no true standard size and they were also manufactured to be 9, 10, or 12 inches in diameter and these larger records played even longer. Just like the other speeds and formats 16s could be played one record at a time or stacked on a changer for continuous play. 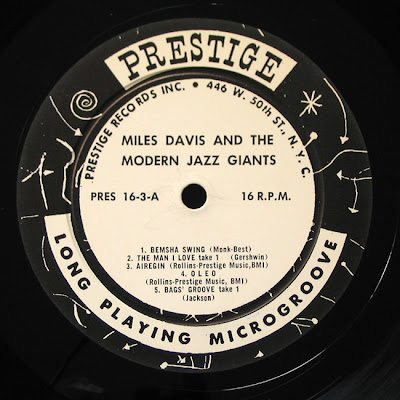 16 RPM records were too slow for proper high fidelity sound. Because good quality reproduction was not possible they were mostly used as outlets for the spoken word although there were some exceptions. (For example, see this label from a 16 RPM Miles Davis disc on the Prestige label).

The famous Seeburg 1000 was a record player that was used exclusively to play background music in offices and restaurants. The system used 16 RPM discs that were 9 inches in diameter and could be stacked on traditional 45 RPM spindle adapters. The records for this system were monaural and could play up to 40 minutes per side. Because the Seeburg's usage was strictly intended for background music the sound quality was not a major concern. You can find out a lot more details on this subject here.

Finally, believe it or not, Chrysler Corporation created Highway Hi-Fi, an audio format that enabled the 16 RPM records to be played in their cars from 1956 to 1958. The system employed a sapphire stylus with a ceramic pick up on a turntable that was installed below the instrument panel. A record player installed in a car? Yes, it really happened. Here is the Wikipedia article about it should you be interested in learning more.

It is obvious why the format died. Cassettes came along allowing people to listen to books in their cars or while jogging around town. Broadcasters also discovered superior sounding and more efficient ways to solve their transcription needs but, for a brief era, the 16 RPM record served a specific and useful purpose.

Even back in their heyday 16s were hard to find because most of them were manufactured for commercial usage only. Many retail outlets who sold records didn't even bother to keep them in stock. I have never seen one nor do I know anyone who ever owned one.  Have any of you ever had the pleasure?

Here's another article you may be interested in. Why Do 45 RPM Records Have Big Holes?
Vinyl Moments