Buried Treasure: Who is Israel Kamakawiwo'ole? 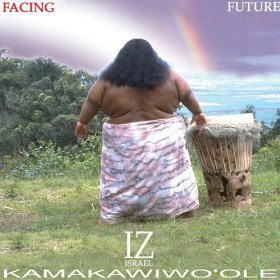 You've probably only heard Israel (a. k. a. Iz) Kamakawiwo'ole's most famous song, "Somewhere over the Rainbow," on TV commercials or in a handful of movies. The tune features Iz's gorgeous vocal accompanied only by his solo ukulele. My love of his version of the classic song is second only to Judy Garland’s original from The Wizard of Oz.

Iz recorded the song twice. The longer version combines Garland's classic with Louis Armstrong’s "It's a Wonderful World" and it's the one I prefer. The shorter track features just "Rainbow" without Armstrong’s hit. Recently, the song rode to the top of the charts in Germany even though it was first recorded for his 1993 CD, Facing Future. By selling 1,000,000 copies it is the first album in history by a Hawaiian artist to achieve platinum status.

I became fascinated with Hawaiian music during my vacation there two years ago and I listened to more than a little bit of Iz on CDs I found in souvenir shops. He possessed a beautiful tenor voice but unfortunately the thing that prevented me from purchasing one of his discs is the fact that he rarely sung in English. Most of his songs were recorded in his native tongue so I waited until I got home and downloaded "Rainbow" from iTunes.

Iz was an important figure beloved by Hawaiians. He was very active politically and was prominent in the movement that continues to push for independence for the former island nation that was annexed by The United States in the 19th century. (We're not talking politics here so if you are interested in this chapter of American history there is plenty on the web for you to read.)

Sadly, Iz was a very huge man and he died in 1997 at age 38 due to severe health problems brought on by his extreme obesity. At his peak he weighed over 757 pounds. The singer was so loved that his body laid in state in the Hawaiian State Capitol building in Honolulu. Only two other people have ever been given that honor and he was the first person to receive it who wasn't a politician. The state flag was flown at half mast. Reportedly, 10,000 mourners attended his funeral.

Iz's musical legacy was his voice, and while the sight of this Everest sized human strumming a very tiny, guitar-like instrument is almost incongruous, there is no denying the special gift belonging to one of the tropical paradise's most revered artists.

Despite the Hawaiian legend's recent, posthumous success in Europe and his god-like status in the fiftieth state it's unfortunate that, while we may be somewhat familiar with his most famous song, most American Mainlanders do not know the man's name.