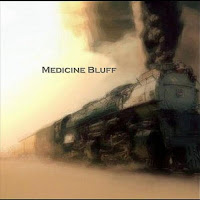 Oklahoma’s Medicine Bluff (named after the famous local landmark where Geronimo escaped to avoid the cavalry) like to say they are part country, but to these ears a more accurate description would be a mixture of mainstream Southern Rock and hard driving Americana. In the studio the band consists of Gary Webb on lead and harmony vocals while David Adair plays bass, guitar, and (to paraphrase his own words) anything else with strings. Bruce Fennel is behind the drum kit. While working as a trio in the studio suits this group just fine they augment their lineup on stage by adding a bassist and a second guitar player.

Most of the songs are about relationships but the band shows its rowdier side on the last three songs. "Brand New Life" is about the need for escapism, "Take Your Medicine" comments on addictions, and "Outlaw" is the disc's perfect finale. The last tune's final thirty-five seconds is an obvious tribute to "Free Bird" that will burn up your speakers. "Two Hundred Miles" is another fast moving rocker that needs to be played at maximum volume. "Make Sure" has a definite grunge vibe with its fluid, tuneful verses offset by a loud, rocking chorus that culminates in some hot soloing by Adair. "Over For Good," the CD's weakest track, is a power ballad that lacks the sub-genre's usual cloying bombast. It's another fine offering because of more great fretwork by Adair and a fine vocal by Webb.

I've tried to pick out Medicine Bluff's biggest asset and I can't decide what it is because each member is so good at what they bring to the table. Webb's vocals could front any Southern rock outfit, Fennel beats the skins as well as any rock drummer, and Adair's lead guitar is astonishingly creative.

This mostly self-written, nine song, CD clocks in at under thirty-eight minutes so it doesn’t overstay its welcome.

You can listen to clips and download the songs here from Amazon or listen to all nine tracks in full on Medicine Bluff's website. Buy the whole album, not just a few individual songs. You won't be disappointed.
Southern Rock