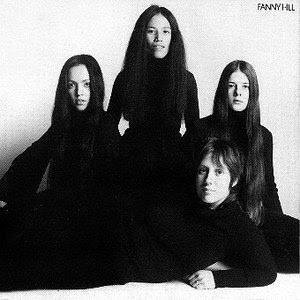 Before there were The Runaways, The Go-Gos, or The Bangles there was Fanny, the first all female rock band signed to a major label. They played hard rock 'n roll the way men do: with power and guts.

Fanny hailed from California but they were more popular in the U. K. where they were eventually banned from playing in the London Palladium for being too sexy. (By today's standards they dressed like nuns). The band consisted of June Millington on vocals and guitar with her sister Jean on bass. They were joined by Nickey Barclay on keyboards and Alice de Buhr on drums. Originally named Wild Honey, George Harrison suggested to producer Richard Perry that he change the group's name to Fanny, a word with much filthier connotations in Europe than it has in America. Unfortunately, the group didn't know this.

Fanny Hill, the ladies' third LP, was taken seriously by Warner Brothers. The sessions were produced by Perry who also worked with Harry Nilsson, Ringo Starr, Barbra Streisand, Diana Ross, Leo Sayer, and more. The album was recorded in Apple Studios in London, England with Geoff Emerick, The Beatles famous engineer, spinning the knobs. It was recorded after they played behind Streisand on her 1971 rock record, Stony End.

The eleven song album opens with a kick-butt version of Marvin Gaye's "Ain't That Peculiar" and they rocked hard on two originals, "Blind Alley" and "Rock Bottom Blues." They also showed their sensitive, feminine side with the story of a young child on the acoustic "You've Got a Home."  Side two opens with another cover, only this time they picked a more obscure song, The Beatles' "Hey Bulldog," that for my money ranks as one of the best covers of a Fab Four song ever put on vinyl.  To the band's dismay Perry added horns and strings to a few of the tracks, which softened up the arrangements and made them sound more mainstream and commercial. Long out of print, this gem was never released on CD.

After two more albums and a couple of personnel changes Fanny broke up and was forgotten by almost everyone even though they led the way for the better known girl rockers who came later.

Fanny Hill was one of my favorite records of 1972 and during my days as a college DJ I overplayed these tracks regularly.