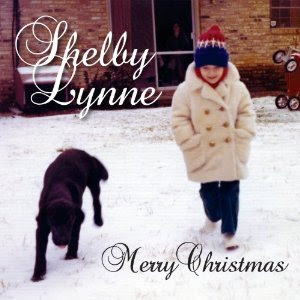 Anyone who has followed Shelby Lynne closely through the years knows that her irreverence and fierce independence allow the strong-willed singer-songwriter to do what she wants with her career, so the fact that she recorded a Christmas album, something that is nothing more than a commercial venture for many artists, is very surprising. Nevertheless, Merry Christmas, Lynne’s second CD release of 2010, and the second one in a row on her own Everso label, is one of the highlights of all the holiday offerings this year.

Lynne has long been known for her outstanding body of original work but with two of her last three albums she has also proven to be a superb interpreter of other people’s music. Just A Little Lovin’, her 2008 tribute to the late Dusty Springfield, was the first testament to that fact and Merry Christmas is the second. This superbly arranged and produced holiday disc is typical of the singer-songwriter in many ways. The music is as unpretentious as the CD’s title and as earthy as a manger scene, yet it’s adorned with colorful decorations that never detract from Lynne’s singing.

The eleven song set contains nine standard Christmas carols and pop tunes plus two originals. "White Christmas" is an all acoustic entry with some nice jazz flute winding its way around the star's vocals. "Santa Claus Is Coming to Town" finds Lynne's voice dancing to some harmonica and a powerful bass line.  Both "Christmas Time is Here" and "Silent Night" are understated and classy while "Christmas Time's A Comin" is pure bluegrass.  The country-swing of "Rudolph the Red-Nosed Reindeer" is just plain fun. She nails the difficult finale to "O Holy Night."

Lynne’s two original songs couldn’t be more different from each other. "Ain't Nothin' Like Christmas" is light-hearted and pleasant, and is almost a throwaway, but in the hands of Lynne it feels like something much more substantial. She sings, "I’ll bring the nog, you put on the log. It’s a Christmas party." The song appears to be a deliberate antidote to her other contribution, "Xmas." By now everyone should know that abbreviating Christmas with an X is considered offensive by many Christians because it removes Christ from the word and the holiday, yet Lynne’s song title is not anti-religion, anti-Christianity, or anti-diety.  Instead it’s a remembrance of her tortured childhood back in Alabama. In Lynne’s case the X is symbolic because Christmas probably didn’t feel like a holiday most years. The song is in stark contrast to everything else on the album. It’s an emotional, slow blues with a sad and sympathetic saxophone helping to set the mood brought on by the track's opening line, "Christmas makes me sad and Daddy's being bad."

Shelby Lynne couldn’t have done anything to make this release more appealing. She has been on a hot streak for a whole decade now and Merry Christmas adds to her legacy as one of country music’s genuinely creative artists.