Arthur Fiedler and The Boston Pops Orchestra - A Christmas Festival (1959) 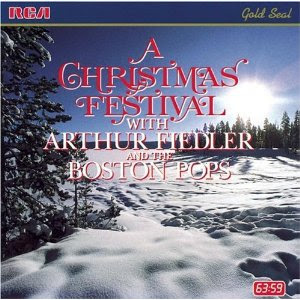 Orchestral music has never been a focus of this blog but today a big symphony rules.  The Boston Pops Orchestra, now headed by Keith Lockhart, previously by John Williams, and even earlier by the late, great Arthur Fiedler (who made them the most popular orchestra in the world) recorded my all time favorite piece of Christmas music.

Fiedler and The Pops' begin their 1959 Christmas record with a powerful 8:44 salvo called "A Christmas Festival" which also happens to be the title track of the album it came from.  This medley of eight traditional carols and songs was arranged by Leroy Anderson who is best known for the orchestra's famous version of "Sleigh Ride" on the same record.  It was released on CD in 1990.

I have a rule in my house (totally disrespected by everyone but me) that stipulates Christmas music may not be played before Thanksgiving morning and not until I conduct The Boston Pops playing this wonderful medley. No other Christmas music, happy or sad, serious or stupid, moves me as much as this instrumental track does every single season.

"A Christmas Festival" really takes off around 6:40 with the full orchestra blasting away in full melodramatic frenzy.  It must be played LOUD.  While watching the video below it's well worth paying attention to the amazing Christmas display in Stafford, VA that was programmed to go along with the music.