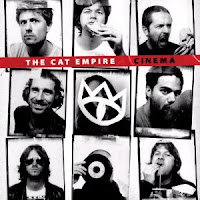 The ska music and the party vibe are a little less prevalent than on previous releases and the lyrics are a bit more serious on Cinema, the latest CD from The Cat Empire. On "Reasonably Fine" they offer the following thoughts, "I lost my shoes, I lost my wife, I lost my keys, I lost my kite, and though I'm young at heart I'm so much older." However, don’t let lyrics such as these prevent you from stomping your feet or singing along with the Aussie horn band at your next Saturday night keg tapping because the combination of a scratchy turntable, a percussionist, and a drummer can make any set of lyrics danceable.

The eccentric lead vocals of Felix Riebl and Harry Angus are still pleasing, the rhythm section continues to burn, and the keyboard work of Olliver McGill is outstanding once again, especially on the coda to "Shoulders" and on the electronics that dominate "Only Light."

Of course, great musicianship rarely matters if the songs don't penetrate your soul and these eleven tracks most certainly do. Despite the often melancholy mood the guys overall positive attitude toward both life and their music help the band avoid sounding depressed. To lighten things up Angus doesn't forget the band's love of all things Caribbean and he proves it on the chorus to "The Heart is a Cannibal," a passage that will surely remind you of 10cc's "Dreadlock Holiday."

It would be almost impossible for Cinema to be as great as their masterwork, Two Shoes, but don't let that stop you from allowing it to take over your brain. While it's a set that sounded like generic pop music upon initial exposure it grows more rewarding with every spin because of the varied nuances and subtleties The Cat Empire employ in their tunes.

The sextet and their horn section appendage have been consistently good throughout their career and Cinema, their fifth CD, is no exception.