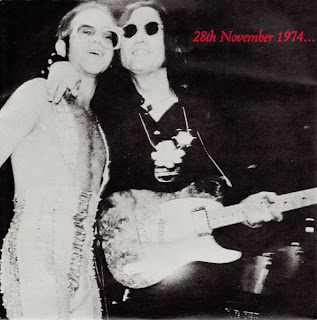 Even though I'm a huge fan of The Beatles I didn't post a tribute for John Lennon’s seventieth birthday because I wanted to do something a little different. That is why Dr. Winston O’ Boogie is this month’s featured artist on Forgotten Music Thursday.

Much has been made of November 28, 1974, the night John Lennon reconciled with Yoko Ono backstage at an Elton John concert after his infamous 15 month "lost weekend." There he began his legendary, six-year journey to find peace as a husband, a father, and a reasonable facsimile of a normal home life. Musically, the evening is also remembered as Lennon's last live performance. The legendary rocker appeared on stage near the end of John's concert and the two great friends sang three songs together. While it has been well documented that the holiday gig was a significant event that changed Lennon's life forever the music he made that day has often been overlooked.

If you were lucky enough to be at Madison Square Garden you were in for a treat. After the piano player's introduction of the former Beatle they opened their short set with Lennon’s "Whatever Gets You Through the Night," a hit that appeared on Walls and Bridges, Lennon's last album of original songs before his retirement. Next came "Lucy In the Sky With Diamonds" a Beatles' song that John had recently released as a single. He gushed that it was one of the greatest songs ever written. Finally, the duo closed things out with Lennon announcing they were going to play a classic song by "an old estranged fiancé of mine called Paul." The crowd roared as they launched into a high energy arrangement of "I Saw Her Standing There." 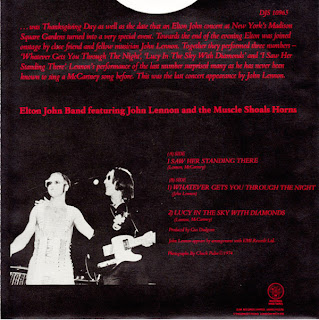 The last song was previously released in February 1975 as the B-side of John's newest single, "Philadelphia Freedom" but it took until 1981 for an English label, DJM Records to release a seven inch, 33 1/3 RPM, EP that contained the entire brief affair. The project, overseen by John's producer, Gus Dudgeon, arrived in America only as a limited edition import.

In 1995 Elton John's catalog was remastered and upgraded and his live album, Here and There was re-released and expanded from a single LP into a double CD that now clocks in at two hours and twenty minutes. The newest edition includes all three duets near the end of disc two.

If you've never heard these versions you can listen to all three of them below.

Whatever Gets You Through The Night

Lucy In The Sky With Diamonds