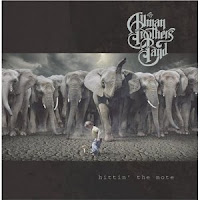 If you ever want to know what The Allman Brothers Band sound like without having Forrest Richard Betts (a.k.a. Dickey Betts) onboard the last album by one of America's most talented and legendary rock bands is your big chance to find out. Hittin' The Note is the only ABB album in which Betts, an original member, was not part of the lineup.

Think back. The band was going to die along with Duane Allman in 1971, right? Fortunately, it didn't and Betts was a major reason why. Then, after he was fired in 2000 fans once again questioned the future of the great band from Macon, Georgia.  Well, not only did the Allmans survive Betts' departure too they're very much alive and kicking butt.  The septet still sounds like Duane is still alive because the dual lead guitars are back courtesy of Warren Haynes of Gov't Mule and the addition of Derek Trucks who, like Haynes, leads his own band. They, and the three original members, Greg Allman and drummers Jaimoe and Butch Trucks (Derek's Uncle), almost qualify the band as a supergroup.  New members, Mark Quinones on percussion and Oteil Burbridge on bass, round out the seven man lineup.

Haynes shares lead vocals with Allman and their collaboration on highlights such as "Desdemona," a mid-tempo blues/jazz workout, is astounding.  The twelve minute jam "Instrumental Illness" makes the listener believe he's watching the band back at The Fillmore.

Hittin' The Note serves up some blues, rock, and jazz, with a little acoustic slide work thrown in for good measure.  What is missing from the album, but not really missed, is the country blues sounds Betts often added to the stew.  I'm not taking anything away from Betts. I'm a fan of his playing and I've followed him through the years.  He deserves his place on Rolling Stone Magazine's list of all time great guitarists (He came in at #58) but in this setting, the one-two punch delivered by Haynes and Derek Trucks more than compensates for his absence.

For those of you who are interested in this sort of thing the disc was recorded with Trucks playing in your right speaker while Haynes was always assigned the left side.  It's a cool way to compare and contrast their styles.

Hittin' The Note is probably The Allman's best album since Brothers and Sisters way back in 1973. You need to check it out because there may not be another one. Greg Allman recently underwent a liver transplant, Betts is gone, and no one knows how much time Haynes and the younger Trucks can devote to the band because they continue to work with their own outfits.
Allman Brothers Band Southern Rock