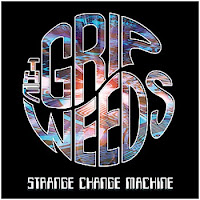 I had never heard of New Jersey's The Grip Weeds until I read this article about them in my local community newspaper, The Reporter. When I checked them out they instantly reminded me of another Jersey band, The Smithereens.  Then, while doing research for this article, I found out that The Weeds drummer, Kurt Reil, has a history working with Pat DiNinzio's veteran pop-rock outfit so the similarities are probably not a coincidence. Reil and his bandmates have also frequently been compared to early versions of The Byrds and The Who.

Kurt, who also serves as the group's lead singer, is joined by his brother, Rick, on rhythm guitar and by the drummer's wife, Kristen Pinell, on lead guitar.  Pinell also works some flute and harmonica into their repertoire. The three made their first CD together in 1994 after forming in the mid-80s. College professor Michael Kelly rounds out the quartet.  He was the last to join the band in 2003, stabilizing the lineup after a series of bassists came and went.

The band's name is a cool bit of trivia. They are named after Private Gripweed, the character John Lennon played in the 1967 movie How I Won The War.

Strange Change Machine, the band's fifth release, is a twenty-four track, double disc set with over eighty minutes of music on it. As do most bands who love 60s rock, The Grip Weeds write melodic songs to go along with their loud guitars and crashing drums.  While their sound is more rooted in the psychedelic late 60s than it is in the early British Invasion years their power pop still sounds modern enough to satisfy the younger listeners who may cross their path.

All four members wrote music for this album and there is a cover of Todd Rundgren's "Hello It's Me" that is very similar to the original version but still nicely played.

Not all of the songs from the music player below are from Strange Change Machine but listen anyway and you'll hear one of the finest unheralded power pop groups around today.