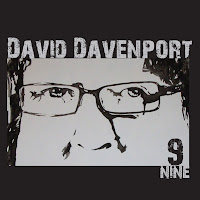 It's often hard to write about artists that I know nothing about because most of the time I'm not armed with enough knowledge to effectively discuss his or her work. Regardless, in the end all that's important is whether the music is good or not and that decision, of course, takes no effort whatsoever. Such is the case with the latest artist to show up in my inbox, keyboard player David Davenport. He's an intelligent rocker originally hailing from Michigan who is now living in Illinois.

Davenport's career is as diverse as the fifty states. He is a classically trained musician who won a scholarship in voice and theater. He played in punk bands in San Diego while opening for the late Johnny Thunders. Back home in the Midwest he formed a delta swing band and opened for Jonny Lang. He has played almost every genre of music over a career that has spanned almost two decades.

Over time Davenport has released two solo CDs, The Big Machine (2003) and One Brother (2008). The latter received airplay on over two hundred radio stations in North America. This year he has released Nine, so named because that is the number of songs on the disc.

Davenport's tasteful voice leads the way on these intelligent, self-penned songs featuring arrangements that have a strong sense of composition. The jazz inflected "Bobby" is about a young dude carrying a knife intent on seeking revenge over a girl he lost and the attempt to talk him out of it. "Forgotten Man" is a reflection on a soldier's sacrifices in war. "One Brother" is a very optimistic look on life that tells the troubled subject that there is always help for you when you're down and out. The upbeat track is highlighted by a Blind Boys of Alabama soundalike gospel group. "On The Wire" is about watching a friend, lover, or close relative die. It's impossible to tell who the victim is but it's a sad, emotional, and wonderful piece of writing. The danceable "Modern Mule" is obviously influenced in several different ways by Roy Head's 1965 hit record, "Treat Her Right."

The world needs to pay attention to David Davenport now, and not just to make it easier for writers to discuss him. He's worthy of any positive press I know he'll receive in the future.