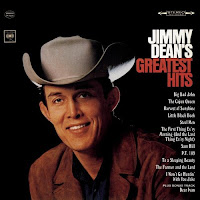 Few people under the age of forty are familiar with Jimmy Dean the singer, actor, and TV host. If they're aware of him at all it's because they saw him hawking his sausages for many years on TV commercials. He left the music business so long ago that millions of people who grew up with his career totally forgot about him. Honestly, I haven't thought of Dean in a long, long time and it took the news of his recent passing on June 13, 2010 to trigger some pleasant memories.

The country star had one hit record during the 1950s ("Bummin' Around" in 1953) and is primarily known for his 1961 single "Big Bad John," a spoken word "song" about a huge, burly, coal miner. The record starts, "Every morning at the mine, you could see him arrive. He stood 6 foot 6, weighed 245. Kind of broad at the shoulders, narrow at the hip. And everybody knew you didn't give no lip to Big John."

The singer's other number one country hit was "The First Thing Ev'ry Morning (And the Last Thing Ev'ry Night)" in 1965. He also went into the country top ten with a Mother's Day tribute, "I. O. U."

Dean starred on his own radio show in the 1950s in Washington D. C. and because of it he is credited with discovering country icons Roy Clark and Patsy Cline. His down home charm, good looks, and business savvy allowed him to crossover to the pop charts and television. After becoming Johnny Carson's first guest host on The Tonight Show he was given his own weekly variety series on ABC-TV. It was rare that a prime time show featured country musicians and the hour long program provided huge assists to the careers of Buck Owens, George Jones, Charlie Rich, and Roger Miller. The latter eventually went on to star in his own weekly TV variety series.

Personally, I remember The Jimmy Dean Show primarily for one thing: early, weekly appearances of The Muppets first TV star, Rowlf the Dog. He performed sketches with Dean from 1963 to 1966, way before anyone had ever heard of Miss Piggy or Kermit The Frog. Dean said that Rowlf became so popular that the lovable, furry critter was receiving two thousand fan mail letters a week.

After his show left the air in 1966 Dean continued recording and added acting to his resume. He won a role in a James Bond film, Diamonds Are Forever, and became a regular on Fess Parker's Daniel Boone TV series from 1966 to 1970.

In 1969 Dean started his very successful sausage company and got into public service when the Governor of Virginia appointed him to the state's Board of Game and Inland Fisheries. He made his final recordings in the mid-70s and except for his commercials virtually disappeared from the media. Both his entertainment career and his food company made him a very wealthy man who could do whatever he wanted to for the rest of his life.

I'm not writing about Dean today because I'm a huge fan. As I said, he hasn't crossed my mind in years. Yet, he is worthy of a tribute because of his successful recording career, his radio and TV shows, and the huge influence he had on country music's then up-and-coming generation of stars, many who became more famous and influential than he was.

It's often been said that death is a good career move. However, despite his legacy, Dean's trip to the great beyond seems to have only generated minimal press coverage, suggesting that he will remain an artist who is not only forgotten by baby boomers and their parents alike but one who will continue to languish in near-obscurity forevermore.

Sadly, Dean was only recently elected to the Country Music Hall of Fame. His induction is scheduled for October 24, 2010. Maybe The Muppets can send his good buddy Rowlf to the ceremony to accept the award on the star's behalf.

Below is a funny TV clip featuring Rowlf The Dog.