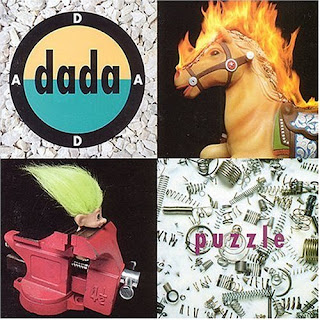 Any CD cover showing a troll doll getting crushed in a vice grip is OK by me and when the music that comes with it is also entertaining we all get a nice bonus. Such is the case with 1992's Puzzle, the debut CD from Dada.

The trio, Michael Gurley on guitar and vocals, Joie Calio, bass and vocals, and Phil Levitt on drums made music that didn't completely fall victim to the angry young man disease most of the grungers and alt-rockers were afflicted with in the early 90s. While it is not completely devoid of sex, alienation, and rebelliousness, Dada has a lot more to offer us and that is why Puzzle was a hit with me. The band plays loud, punchy rock with hooks, melody, harmonies, and imaginative lyrics.

Even though they don't jam incessantly Gurley has proven himself to be a very fine rock guitarist. His style mimics many older ax wielders of the 70s. Weaving around the catchy verses of "Dorina," and on top of Calio's very strong bass lines, Gurley plays four brief but tasty solos that always stay fresh due to their brevity, his originality, and the fact that the trio makes the song, not their egos or guitar hero pyrotechnics, the most important part of their music.

On the humorous "Dizz Knee Land" (#5 on Billboard's Modern Rock Tracks chart), before Gurley takes off with another great solo, the band managed to poke fun of those well known Disney World commercials while at the same time showing their disdain for authority. They sing:

Other top tracks include, "Here Today, Gone Tomorrow," "Surround," "Posters," and "Mary Sunshine Rain." The latter's lyrics make you feel like its 1967 which is just what it's title suggests.

The original trio is still together, still recording, and still touring after some time off early last decade, but nothing they've released has made the impact of this first CD that went to #2 on Billboard's Heatseekers Chart.

You can find out more on their website where you can listen to a full concert, including "Dizz Knee Land" and "Dorina," via streaming audio.