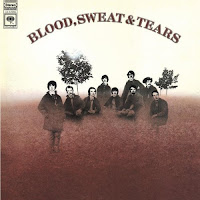 It's been quite awhile since Bloggerhythms talked about a popular classic rock album so it's time to discuss a record that, upon its release, significantly influenced what I'm still listening to today. It's not my favorite horn band record from that era but it's the one that ignited my love of brass and reeds in rock music. The LP is the eponymous, second album by Blood, Sweat & Tears (BS&T). From there it was an easy transition to Chicago, Chase, Ides of March, and BS&T's artistically superior debut album, Child Is Father To The Man.

Before Blood, Sweat & Tears became a big hit bands with self-contained, complete horn sections played only a minor roll in rock. For instance, James Brown's band always had horns but Brown was the main man. Everyone else was there to make him look good. BS&T was the first time an album with a horn section as its featured attraction had gone big time on top 40 radio and spawned a slew of hit singles.

With the demise of Al Kooper's original BS&T (an event that saw the star leaving the building along with future jazz great Randy Brecker and a couple of other members) the jazz-rock outfit could have easily called it quits. Instead they carried on with some fresh blood under the same name and replaced Kooper's vocals with the very soulful David Clayton-Thomas. While he could sing rings around Kooper the founder's composing, arranging, and artistic talents could never be replaced. The band truly lost an American music original when he left as BS&T became a more commercial venture.

Nevertheless, Blood, Sweat & Tears is a fine record. After opening with an adaption of avant-garde composer Erik Satie's "Trois Gymnopedies" the band follows it with a jazz arrangement of Traffic's "Smiling Phases" topped off with a great piano solo from Fred Lipsius. Next is guitarist Steve Katz's ballad, "Sometimes In Winter," a song he wrote and sang lead on instead of Clayton-Thomas. Dick Halligan added a nice flute solo. Next is the harder rocking "More and More." Their version of Laura Nyro's "And When I Die," with Katz on harmonica, was a hit single. Side one closes with another jazz piece, Billie Holiday's "God Bless The Child."

Side two opened with longer, LP only versions of their hits, Spinning Wheel" and "You've Made Me So Very Happy," before ten minutes of jazz improvisation morphs into "Blues, Part 2" featuring very earthy vocals from their lead singer. The piece segues into and closes the side with a reprise of Satie's classical theme that opened the album.

Welding jazz and rock was a novel idea in 1968, and while BS&T's popularity would quickly fade away, their early success helped launch the career of Chicago Transit Authority who would go on to bigger and better things in the not too distant future. BS&T was produced by the talented James William Guercio who, not coincidentally, also produced Chicago.

Overall, this is an essential album of classic rock.
Blood Sweat and Tears Classic Rock Jazz