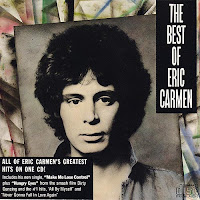 Eric Carmen never tried to be the hippest dude on the music scene yet he managed to carve out a niche for himself and ended up cooler than many of his critics would ever be willing to admit. Carmen first came to prominence with The Raspberries, a four piece who were considered musically out of touch by just as many people who believed they were the quintessential 60s rock band of the 70s. Two early hits, "Go All The Way" and "I Wanna Be With You," had obvious British Invasion influences but most critics considered them trite imitations. Also, the band wore matching outfits on their LP covers, something that made them even more disliked by the rock establishment of 1972. The band may have begun their career far behind the times but they were eventually considered to be power-pop pioneers a few years later when a significant portion of the rock community embraced artists like Nick Lowe who helped make the sub-genre popular.

On their last album, Starting Over, released in 1974, the band updated their sound by adding a harder edge to their music, at times even sounding like a genuine 70s hard rock outfit. Side one opened with what I believe was their best song, the terrific "Overnight Sensation." It's about Carmen's desire for a number one hit record.

After Starting Over failed to live up to Carmen's expectations he disbanded The Raspberries and rose to greater commercial heights as a solo artist. The Best Of Eric Carmen is an eleven track compilation that is perfect for the casual fan as it contains all of his best known solo hits. Included are "All By Myself" a song he based on Sergei Rachmaninoff's "Piano Concerto #2," and "Never Gonna Fall In Love Again," both from his solo debut. There is "Hungry Eyes," from the soundtrack of Dirty Dancing, as well as "Hey Deanie," "She Did It," "Boats Against The Current," and "It Hurts Too Much."

The set would not be complete without the best song he wrote and recorded either as a solo artist or with The Raspberries, "Make Me Lose Control," a huge hit that the CD's liner notes describe as "an infectious hymn to the seductive powers of pop." The highlight of Carmen's career occurs when he sings, "Turn the radio up for that sweet sound, hold me close and never let me go." The song may not be high art but it sure is fun.

As a solo artist Carmen may have driven in a different direction than his original band traveled but his pleasant singing voice, his production values, and his knack for writing melodies that stick with a listener long after hearing them for the last time, make him an artist who transcends traditional top 40 fare.

Here is a live version of "Make Me Lose Control" introduced by Cousin Brucie, the legendary New York DJ.