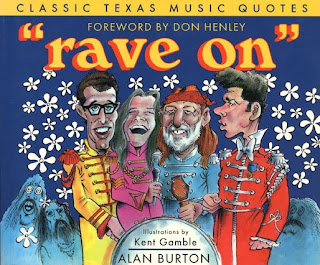 The quote by writer and music critic Tom Moon, "The more you love music, the more music you love," is from the cover of his excellent book 1,000 Recordings To Hear Before You Die. It's probably my favorite quote about music. Moon's words got me thinking about other musical quotes I've read. So today, instead of writing a CD review, I thought I'd post some of my favorite musical witticisms, complaints, and observations.

While researching this article I was surprised to learn there have been multiple books published devoted to nothing more than quotes about music. One of them, pictured here, explores classic music quotes from Texas. I doubt if anything posted below is from Rave On but it could be a very interesting read due to all of the outstanding and varied musical personalities who have called the Lone Star State their home. The very cool cover features four famous Texans in Sgt. Pepper outfits.

I hope you enjoy the "wisdom" you're about to read.

Your horn players are like one set of lungs and your guitar player is better than me. - Jimi Hendrix talking to Walt Parazaider, woodwind player for The Chicago Transit Authority

I can't listen to that much Wagner. I start getting the urge to conquer Poland. - Woody Allen, comedian, actor, director

A painter paints pictures on canvas but musicians paint their pictures on silence. - Leopold Stokowski, conductor, 1882 -1977

Music is the wine that fills the cup of silence. - Robert Fripp, leader of the prog-rock band, King Crimson

I worry that the person who thought up Muzak may be thinking up something else. - Lily Tomlin, comedienne, actress

The scratches in Yoko Ono records are moments of relief. - S.A. Sachs

Music is everybody's possession. It's only publishers who think that people own it. - John Lennon

You can't possibly hear the last movement of Beethoven's Seventh and go slow. - Oscar Levant, pianist, actor, comedian, 1906 -1972, explaining his way out of a speeding ticket

I've said that playing the blues is like having to be black twice. Stevie [Ray Vaughan] missed on both counts, but I never noticed. - B. B. King

Jazz is the big brother of the blues. If a guy's playing blues like we play, he's in high school. When he starts playing jazz it's like going on to college, to a school of higher learning. - B. B. King

If a composer could say what he had to say in words he would not bother trying to say it in music. - Gustav Mahler, classical composer

An intellectual is someone who can listen to the "William Tell Overture" without thinking of the Lone Ranger. - Dan Rather, TV journalist

The Irish gave the bagpipes to the Scots as a joke, but the Scots haven't got the joke yet. - Oliver Herford, American writer, 1863 - 1935

For those about to rock, we salute you. - AC/DC

Rock 'n Roll: The most brutal, ugly, desperate, vicious form of expression it has been my misfortune to hear. - Frank Sinatra

I don't know anything about music. In my line you don't have to. - Elvis Presley

This land is your land and this land is my land, sure, but the world is run by those that never listen to music anyway. - Bob Dylan

If you talk bad about country music, it's like saying bad things about my momma. - Dolly Parton

Talking about music is like dancing about architecture. - Steve Martin

Music with dinner is an insult both to the cook and the violinist. - Gilbert K. Chesterton, English Writer, 1874 -1936

The '60s was one of the first times the power of music was used by a generation to bind them together. - Neil Young

Jazz will endure just as long people hear it through their feet instead of their brains. - John Philip Sousa, American conductor and composer of military marches, 1854-1932

By and large, jazz has always been like the kind of a man you wouldn't want your daughter to associate with. - Duke Ellington

If you have to ask what jazz is, you'll never know. - Louis Armstrong

There are two kinds of music, the good, and the bad. I play the good kind. - Louis Armstrong or Duke Ellington. Take your pick.