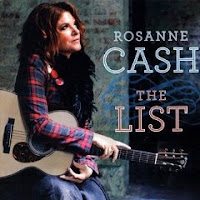 Is there anyone out there who still doesn't know that Rosanne Cash's father was the late Johnny Cash and her stepmother the late June Carter Cash? If this is breaking news to you then the singer's latest CD, The List, is probably not for you. Please stop reading right now and go back to listening to the latest scantily clad teenager spewing forth heavily processed vocals while she cavorts around the stage to synthesized instrumental tracks.

The List is a wonderful collection of songs given to the world by one of country music's best talents. It also has a very nice back story. Johnny Cash was quite dismayed that when Rosanne turned eighteen her musical frame of reference only included the songs she heard on the radio. So, the country icon sat down and wrote out a list of one hundred American country and folk songs he considered indispensable and gave it to her. She kept the list and, thirty-five years later, picked twelve songs from it for this CD.

Many excellent standards are included. Patsy Cline's "She's Got You," Bob Dylan's "Girl from the North Country," and "Long Black Veil," a duet with Jeff Tweedy, are all present and accounted for. One of my personal favorites,"500 Miles," an early hit for Peter, Paul, and Mary, is here too. Bruce Springsteen helps out on "Sea of Heartbreak," Elvis Costello on "Heartaches by the Number," and Rufus Wainwright duets on "Silver Wings." The album's sparkling arrangements were produced by Cash's husband, John Leventhal. Her alto voice is as beautiful as ever.

This is Cash's second deeply personal CD in a row. Black Cadillac (2006) was written as a catharsis to deal with the losses she suffered after the deaths of her father, her mother, Vivian Liberto, and her stepmother all within twenty-two months of each other. Fortunately for us the star has turned her sadness into some excellent music. Because The List is so deeply personal to Cash it's obvious that she doesn't view it as just another album full of cover songs and that accounts for her ability to effortlessly transfer those feelings to the listener.