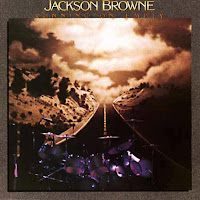 Most singer-songwriters seem to have a short shelf life. They issue three or four excellent albums early in their careers, win over the critics and much of the public, and then coast for the next twenty-five or thirty years. Perhaps they just run out of things to say. Finally, after they shake off all of the rock 'n roll demons, they return with a comeback album that almost rivals the quality of their early output. Such is the case with one member of the Rock 'n Roll Hall of Fame, Jackson Browne.

Running On Empty was Browne's fifth album and, for some, it was the beginning of the end of a great five year run. For other listeners, like me, it was the album that made me a big fan. Is this Browne's best album? Probably, not. Those honors are usually reserved for his 1972 self-titled debut or, my personal favorite, his superlative 1974 disc, Late For The Sky. Also included in that hitting streak are For Everyman (1973) and The Pretender (1976).

Running On Empty was different from most LPs of its day. It was a concept album with a rather unusual subject. Most of the songs are about a musician's life on the road. On "Rosie" Browne sings about groupies. "Cocaine" is a cover song about drugs. "Nothing But Time" discusses the boredom of touring, and the finale, "The Load Out/Stay," is a tribute to the roadies, the fans, and the concerts he and the band played at the end of that long, tedious road. Secondly, there are no known studio versions of any of these songs nor is it entirely a live album. "Nothing But Time" was recorded while traveling on the band's bus. You can even here the rumbling roar of the bus's motor in the background. Other songs were recorded in hotel rooms while on tour. "The Load Out/Stay" and the title cut, both concert performances, became huge hits. The latter is still one of my favorite songs of all time.

The album garnered mostly favorable, but mixed, reviews. Some critics complained about what they believed was Browne's woe-is-me attitude regarding fame and fortune. William Ruhlman, of the well known All Music Guide, wrote that some people referred to the record as "Jackson Browne lite." To me it was his most accessible work to date (which probably explains the "lite" tag assigned to it) and, after seeing his accompanying tour in the Summer of 1978, I dove deeper into his back catalog.

Running On Empty made Browne a star and it remains his biggest selling album. Unfortunately, even though his subsequent followup records, 1980's Hold Out, 1983's more shallow Lawyers In Love, and the single, "Somebody's Baby," all sold well they have left no lasting impact on his legacy. It would not be long before his introspective writing became less focused on coping with life, love, and one's feelings about both. The songwriter part of him became more interested in political activism, most notably America's involvement in El Salvador and his No Nukes campaign. Browne was a product of the 70s, "The Me Decade," and his lyrics reflected the time. When he turned toward the less selfish activism of the 60s his work wasn't as appealing to many long time fans, although, in the end, we found he still had a lot to say.

In 1993 Browne issued a comeback of sorts with I'm Alive and he continues to record and tour today. He has given up drugs, still fights for his causes, and still has the respect he won with his early albums.