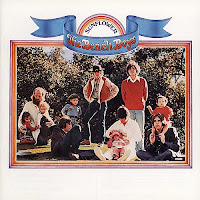 It's quite possible that you've never listened to Sunflower. It quickly became the poorest selling and possibly the most obscure album in The Beach Boys catalog when it was released in 1970. According to Wikipedia, it was only on the charts for four weeks and reached #151 in the United States. In England, where the band was much more popular at the time, the album went to #29.

Sunflower contains some of the seminal band's greatest music ever and this isn't just some music snob trying to push the obscure stuff. Most people who eventually heard this astonishingly wonderful record will tell you the same thing. The album, the group's first for Warner Brothers, was released during the boys highly artistic period that began with Pet Sounds in 1966 and ran through Holland in 1973. That period proved the guys from Hawthorne, California were far more than Brian Wilson's backup band at a time when they still had the motivation to be one of the best outfits on the planet.

All six members contributed to the album as a unified team (the original classic lineup plus Bruce Johnston were all on board). Everyone had composing credits on this self-produced record that offered some of the best harmonies the band ever recorded together.

Sunflower was Dennis Wilson's best moment in the studio so far. He contributed the the mid-tempo rocker "Slip On Through," the upbeat "Got to Know The Woman," and the beautiful ballad "Forever." Only his 1977 solo album, Pacific Ocean Blue, rivaled his work here.

Brian shook off his troubles long enough to write or co-write seven of the twelve tracks but it is not believed he was much of a studio force during its production. One of his co-written songs, the single, "Add Some Music To Your Day," is included here and it's one of the band's most outstanding works. It is unfair that this song never became a monster hit. Both the album and the song were released during a time when the Woodstock Nation considered The Beach Boys to be, at best, nothing more than quaint musical throwbacks. The band's popular revival, spearheaded by the double CD anthology of Endless Summer in 1974, was still a few years away, so America missed out on some great music because of it.

Carl shined on "This Whole World." Bruce Johnston turned in some of his best songs with "Deirdre" and "Tears In the Morning." Only the slightly weird Brian Wilson - Mike Love production of, "Cool, Cool, Water" and the harder rocking, "It's About Time" seem out of place with the rest of the record but they too have some very nice moments.

On Sunflower The Beach Boys modernized their sound while still playing to their strengths. Brian Wilson already proved with Pet Sounds that they were far more than gimmicky surf-rockers, and with this work, so did the rest of the band. You must make this music part of your life. It's not too late.

Here is some Sunflower music.

Listen to the original "Add Some Music To Your Day" and then, just to show you how well The Beach Boys could sing, here is an a cappella version of the same song.

Next, Carl sings "This Whole World" and, in a rare live performance, he and the band perform it in 1988.

Finally, Dennis sings "Forever" live. Watch him sneeze at the 2:07 mark and laugh about it a few seconds later.