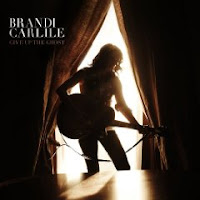 Unlike 2007's The Story, produced by T Bone Burnett, Give Up The Ghost, is a more rocking affair with Rick Rubin at the helm.

The livelier first half of the disc trumps the more folky singer-songwriter oriented songs of the second half but that does not mean Carlile should have left the quieter stuff on the cutting room floor. To the contrary, the second half only pales by comparison. If tracks one through five were released as a separate EP, and songs six through eleven were issued the same way, and you listened to either one without ever hearing the other, you would still be very impressed by everything you heard.

The buoyant melodies, harmonies, and arrangements of the rockers may have you tapping your toes even while Carlile continues to be a serious songwriter. The opening track, "Looking Out" contains the heavy lines, "I laid a suitcase on my chest so I could feel somebody's weight." The tune ends with the declaration "Someone loves you," and because it does, we know it's OK for the song to sound so upbeat.

"Dying Day," written by Carlile's guitarist and close friend Tim Hanseroth, offers more deep thoughts yet the song is never morose. It's rocking workout helps the listener understand that while Carlile is often "lost in a sea of drunken screams" we also know that everything will turn out fine because she is "gonna love you 'til my dying day."

Carlile's childhood idol, Elton John, who proves here that he has never gotten enough credit for his piano playing, is featured on the terrific "Caroline." The single, "Dreams," is about physical love, and "That Year" is about dealing with a friend's suicide ten years later.

Carlile relies on her two main sidemen, the Hanseroth twins, more than ever. This time around she only wrote three of the songs without their assistance. Amy Ray, Benmont Tench, and Chad Smith of the Red Hot Chili Peppers all lend a hand in the studio.

Give Up The Ghost, a late entry for album of the year honors, is a must for all lovers of Americana rock. No other label fits this hybrid of folk, modern country, and rock 'n roll that is a perfect backdrop for the singer's powerful and beautiful voice.

This album has it all.