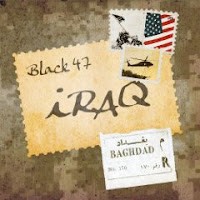 The very left-wing Larry Kirwan has never been afraid to tackle deep and controversial subjects with his music. He has written about "Bobby Sands, MP," tackled homosexuality on Black 47's updated version of "Danny Boy," recorded a song titled "Bobby Kennedy," wrote about Paul Robeson, and named dropped James Joyce in a song.

Even for the outspoken Kirwan it is really brave, and maybe a bit over the top, to devote a whole album to the war in Iraq, yet that is exactly what he does on Black 47's latest CD, Iraq. He sings about "Sadr City," "The Battle of Fallujah," and honored war protester Cindy Sheehan with her own song. As always, Kirwan is very critical of the former Bush administration.

Much of the inspiration for Iraq comes from the real life experiences that Black 47 fans have shared with the band. Many of the soldiers who returned home from Iraq come from the side of the political spectrum Kirwan never crosses, yet his lyrics succeed in giving the brave men and women who fought for us overseas the respect they deserve. It is because of former and founding member Chris Byrne (a member of the NYPD during his Black 47 career) that Kirwan writes about the band's diverse fan base on his website. "Because of our background, we've always had as strong a fan base of right wing cops, firemen and conservatives, as of left wing students, radicals, and the working disaffected..." "Southside Chicago Waltz" is about one of these young Black 47 fans."

Production-wise, this is the loudest album the Celtic-rockers have ever recorded. The volume, especially Kirwan's electric guitar, is cranked up to ten, too often making the all important lyrics hard to comprehend. While Black 47 have never been a quiet band Kirwan's vocals have always been upfront and that is extremely important for a writer as literate as he. However, because his voice is often lost in the mix the tragic and moving tales are frequently buried under the noisy, industrial sounding clatter. That's unfortunate because the subject matter deserves more.
Black 47 Celtic Rock