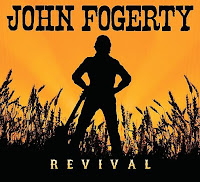 Creedence Clearwater Revival is definitely one of America’s all time great rock 'n roll bands. Today, John Fogerty continues to make CDs that sound just like CCR and that is fine with his fans because his loud, bluesy, swamp rock sound has always been an undeniable treat. The only difference between the music Fogerty currently makes and a typical Creedence album is that his latter day solo works lack the knockout singles that CCR issued with astounding regularity back in their heyday. That said, Fogerty’s music is still high quality work worthy of your attention.

Revival, Fogerty’s latest, is louder than his more country influenced comeback of 1997, Blue Moon Swamp, and more intense than 2004’s Deja Vu All Over Again, although it lacks the killer signature radio song that was its predecessor’s title track.

Politics is a major theme on Revival, and at times the subject is too pointed, as Fogerty’s screaming and ranting at George W. Bush, Donald Rumsfeld, and Dick Cheney prove on "Long Dark Night." Calling them all out by name is a bit over the top. The song is just too angry to work well. Better is "Gunslinger," a far more subtle, more intelligent, and therefore more successful, attempt at making the same points. When it was recorded most of the world had never heard of Barack Obama, yet listening to the song today it’s easy to interpret the current President to be the intended gunslinger that Fogerty wishes would arrive in town to save the day.

Then there is "Creedence Song," a track that can be seen as Fogerty's tribute to himself and his band. It’s a little out of character for a man who for decades tried to bury his CCR past. It can also be seen as bragging. "Summer of Love" celebrates an event that suffered through its fortieth anniversary at the time this CD was recorded. Upon reflection, the summer of ’67 turned out to be mostly about sex and drugs. The "love" discussed so much back then has long since disappeared from a scene that is no longer so groovy.

Revival is a fine effort marred only by Fogerty’s too many attempts to relive his glory days, celebrate a period in time that doesn’t really need reliving, or rail against the government. Musically it’s great although lyrically the disc won’t win him any young converts. However, I don’t think the rocker cares. He is targeting his music at his original fans and mostly succeeds.