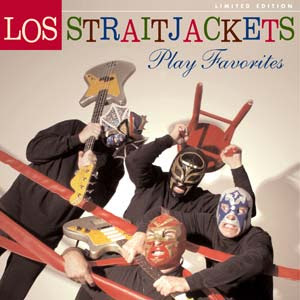 Nashville's Los Straitjackets wear Mexican wrestling masks while performing an all instrumental repertoire of high volume surf music made for dancing. The influences of Dick Dale, Carl Wilson, The Ventures, and mid-60's mainstream guitar rock are readily apparent. Group founder, Danny Amis, speaks only Spanish on stage, except for the smattering of English he uses when announcing their songs and CD titles.

North Carolina's Southern Culture On The Skids (SCOTS) are a quartet who honors it's Southern roots by poking fun at themselves. They wear bowling shirts, ill fitting and wildly unmatched clothing, and throw fried chicken into the audience. Bassist/vocalist Mary Huff has the largest and highest hairdo we've seen since Dolly Parton and the B-52s. In between songs she picks up a mirror sitting on her amp and proceeds to fix her hair, flipping it around as needed to further cultivate the image. SCOTS sing about fried chicken, double wides, shotguns, and pickups. 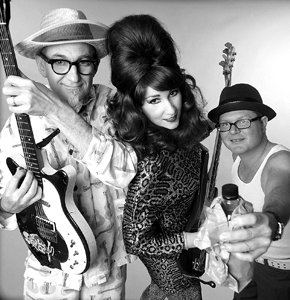 Rock fans may wonder if these two very different and veteran bands paired together for an evening of music will appeal to the same audience. The answer is yes. Despite their completely different images SCOTS and the four masked men have more in common than one might suspect. Credit must go to the concert promoters who saw the similarities.

Instrumentally the quartets are identical. Both lineups include two electric guitars, bass, and drums, nothing more. Surf-rock lead guitar is part of the mix for both groups, especially with Los Straitjackets. Their music is simple, straightforward and not over-arranged. Neither band takes themselves too seriously. Unlike U2, they are not trying to change the world. Both bands succeed because they're good composers and musicians so stage shows that may be nothing more than mere gimmickry in less talented hands never get in the way of the music. Otherwise their shticks would grow tiresome quickly.

Los Straitjackets opened the evening. Their set was highlighted by a cover of the Chantays' oldie, "Pipeline" and a surprisingly effective rock arrangement of Benny Goodman's "Sing, Sing, Sing."