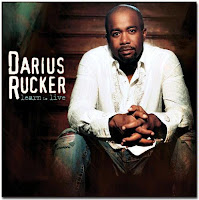 On his second solo effort, the very compelling baritone of Darius Rucker is front and center on this pleasant CD of contemporary country music. That is how it should be because Rucker's voice is the reason to listen to Learn To Live.

The twelve songs are loaded with fiddles, banjos, and steel guitars, but they're buried deep enough in the mix to allow the electric guitars and drums to have their say. The latter gives the proceedings a rock 'n roll feel that downplays the country aspects of the music. At times Learn To Live doesn't sound like a country record and I'm sure that was a deliberate decision made in order not to alienate the singer's original fan base.

Rucker co-wrote all of the songs and they're good enough for repeated listens even if they're not classics. In fact, the tunes don't have to be great because his voice, one of the most pleasing in rock, carries the disc from beginning to end. Whether it's a ballad, up-tempo country, or straight ahead pop-rock, the former frontman for Hootie and The Blowfish is up to the task.