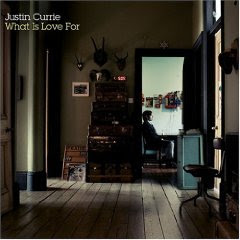 Over the last twenty years one of my favorite rock bands has been Scotand's Del Amitri. Unfortunately, two years ago the band lost its recording contract and their subsequent hiatus appears to be permanent. That is a real shame. Del Amitri should have been huge.

Their rock was melodic and never far out of the mainstream. The subject matter of their songs was mostly about romantic relationships (granted, many of the tunes didn't have happy endings) and their lead singer and primary composer, Justin Currie, owns one of the finest voices ever to front a rock band.

Considering all of the above I should have been more thrilled when Currie released his first and only solo CD, What Is Love For, in October, 2007. A couple of cursory listens didn't hold my interest and I rapidly dismissed the disc. Then, last week, while shopping at the Princeton Record Exchange, I found it in their discount rack for $1.99 and decided I owed Currie another chance. I'm glad I did because after a complete and more detailed listen I've come to the conclusion his solo disc ranks with Del Amitri's best work.

What Is Love For explores most of the same themes that Currie's band often did but musically it's a very different experience. Love's downside dominates most of the songs and the middle to slow tempos of the arrangements fit Currie's moody explorations on romance well. There is almost no rock 'n roll on this record. The combination makes it a far more serious outing than Dels' fans have normally come to expect. As an example, on his former band's "Not Where It's At" Currie's self-deprecating humor about not getting the girl brings a smile to our faces. There are no such smiles here, yet Currie is such a good writer and vocalist that you can't wait for the next song to begin.

Set against a very foreboding bank of strings, the highlight of the album is the outstanding final track, the wordy "No, Surrender." Currie takes almost eight minutes to list everything he believes is wrong with the world while, in the chorus, he tells the listener to just give up, don't fight life, simply surrender. The contradiction between the sentiments expressed on this track and the overall production and effort he put into the entire disc is obvious. Mr. Currie, if you don't care, why do you put so much time and energy into your music. This CD proves you do care very much, at least about making great albums, and that's not a depressing thing at all.
Rock 'n Roll