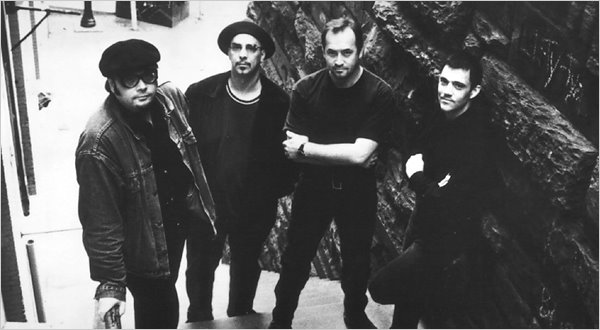 The Smithereens prove two musical axioms. The first one is that not all rock 'n roll bands are rewarded with success commensurate with their talents and the second one is that not all 80s rock was a gigantic waste of time. The latter is true because The Smithereens' music stays true to its roots. They offer the listener real rock 'n roll played with real instruments. You won't hear synths or computers anywhere on their albums.

Lead singer and composer Pat DiNizio and his band have an affection for the British Invasion and mid-60s American rock. The Smithereens, now in existence for over twenty years, have remained loyal to the sub-genre without sounding dated because they have always stretched their musical boundaries. What they do best is take their loud, guitar based arrangements, add lots of heavy bass ("Blood and Roses" from their 1986 debut, Especially For you, is an example of their superlative deep bottom sound) and very catchy, melodic, vocal hooks. The combination should have given them a huge following, especially with people who like both hard rock and good pop songwriting.

Unfortunately The Smithereens never quite achieved stardom. Just as "Too Much Passion" from their fourth CD, 1991's Blow Up, was released and climbing the charts the quartet was buried under the avalanche rolling downhill from Seattle. After Nirvana, flannel, and grunge all struck it big The Smithereens learned to be satisfied with their devoted cult following. The New Jersey band lamented their fate on their fifth CD, 1994's A Date With The Smithereens, with DiNizio proclaiming the band was "Sick Of Seattle."

Unfortunately after Blow Up DiNizio's songwriting gift appears to have vanished. A live album, two albums of Beatles covers, and a brand new Christmas CD, all seem to prove that the band has lost it's way as a creative force. Let's hope that DiNizio can regain his composing gift so we can all be treated to some mighty fine, unpretentious rock 'n roll once again.

Despite the downturn in The Smithereens recording career they are still a great live band. I saw them at an outdoor music festival this past summer and they jammed their hearts out.

In addition to those already mentioned some of the outfit's other best known songs include "Behind The Wall Of Sleep," "A Girl Like You," and "Only A Memory."