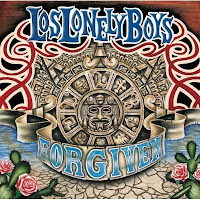 Los Lonely Boys are back with their third studio album in just four years, and fortunately, Forgiven proves there has been no drop off in quality. The Garza Brothers have retained their signature sound that can easily be described as Stevie Ray Vaughan with three part harmonies.

This young but now veteran roots trio has made another fine album that rocks your socks while providing lead guitarist Henry Garza with an abundance of opportunities to prove he can wield his axe with any of the best bluesmen on the planet. Garza shows off his stuff on the CD's opening track "Heart Won't Tell A Lie." The whole trio burns on a hard hitting take of The Spencer Davis Group's "I'm A Man," which is just as exciting as the original, and "Superman" rocks out as much as any mainstream music possibly can.

The trio's more middle-of-the-road pop songs demonstrate their ability to write memorable melodies with some of the best vocal harmonies on the current rock scene. The title cut is excellent but the real pop gem is the single, "Staying With Me," a tune possessing one of the catchiest vocal hooks that I've heard in quite a long time. The song is perfectly titled because its melody will "stay with you." It's simply impossible to get it out of your head.

Forgiven is more stripped down and to the point than it's more produced predecessor, 2006's Sacred. This outing mostly features the brothers with only minimal outside help from Dr. John on three tracks and some extra percussion assistance from Steve Jordan on "I'm A Man." There are no strings, brass, large ensembles, or layered production techniques.