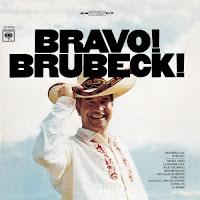 When people think of 1967 in the world of music the discussion almost always starts and ends with The Summer of Love and Sgt. Pepper's Lonely Hearts Club Band. However, the year wasn't all about San Francisco, wah-wah pedals, and psychedelic rock. The proof is that one of the most highly regarded bands in jazz history was still playing at its full strength even though it was nearing the end of its eleven year run. Drummer Joe Morello, bassist Eugene Wright, and alto saxophonist Paul Desmond were all still working together with their leader, pianist Dave Brubeck, for a series of concerts in Mexico City.

The Dave Brubeck Quartet was quite eclectic. When a sweet and quiet passage almost lulled you to sleep Brubeck's piano playing would suddenly turn frenzied and then just as quickly he would return to more traditional territory. Desmond's sax work was never as intense as Brubeck's playing so he often was able to make the music more palatable for those listeners looking for the melody. Much has been made of the quartet's usage of unusual time signatures, and I'm sure it impresses musicians and composers, but most listeners only care about how the music sounds. No matter what time signature Brubeck used, or how complex his arrangements were, his band always played jazz that even casual jazz fans could appreciate.

The quartet's sound is easily identifiable on Bravo! Brubeck!. When you hear the interplay between Brubeck and Desmond there is no doubt about who you are listening to. This time, though, they shared the stage with two Mexican guests, guitarist Benjamin "Chamin" Correa and bongo player Rabito Agueros, who add some fine Latin flourishes to the performances. For these concerts Brubeck forgoes his usual repertoire and arranges several Mexican favorites to suit his own style. Among them are "Cielito Lindo," Frenesi," "Poinciana," and "La Paloma Azul." He closes the disc with a wild and barely recognizable arrangement of the rock standard, "La Bamba."

Bravo! Brubeck! is a nice set of live jazz to purchase because the song selection isn't duplicated on any other Brubeck release. If you are a lover of Brubeck, as well as a fan of both Latin guitar and percussion, give this disc a listen.