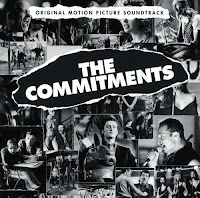 I've never seen the 1991 Irish film, The Commitments, but curiosity got the best of me when I discovered the soundtrack on CD for $2 at a local church fair. After one listen it became apparent that I have been missing out on some great music that stands on its own even without seeing the movie. There is nothing at all Celtic about the enthusiastically performed fourteen songs on this disc that make a strong case this small, music loving nation has a powerful affection for American R&B. The movie is about that love affair and how a bunch of working class Dubliners try to hit the big time simply by playing the music they love best.

The group's best lead singer is clearly Andrew Strong whose career took off after the flick became a hit. He has toured with Elton John, The Rolling Stones, Prince, and Lenny Kravitz and has released several best-selling albums. Strong's powerful voice can be compared to Wilson Pickett's and here he turns in two Pickett worthy performances of "In The Midnight Hour" and "Mustang Sally." He also shines on the Al Green penned hit made famous by The Talking Heads, "Take Me To The River," and Otis Redding's "Try a Little Tenderness."

The band's three lady vocalists take turns singing lead on Aretha Franklin's "Chain Of Fools," and "I Never Loved A Man," as well as "Bye Bye Baby" from the Mary Wells songbook. Arkins is out in front on a blowup-your-speakers version of Roy Head's "Treat Her Nice" and on Clarence Carter's smooth "Slip Away."

Only you can decide if these arrangements stand tall against the originals, and if you don't believe they do, the reason may be the over-familiarity many have with the American classics. Most of The Commitments versions of these tunes are worthy of being hits and maybe they would have been if these talented Irish singers had recorded them first.

The film became widely influential by helping discover Glen Hansard, leader of the Irish rock band The Frames. Hansard is now famous for his Academy Award winning song "Falling Slowly" from the movie Once. It was also the first big break for The Corrs, each of whom won a small roll in the movie.

Many of these Irish singers and players in The Commitments may have blue eyes, but there is nothing blue-eyed about their soul.
Celtic Rock Corrs Rhythm and Blues Soundtracks Various Artists