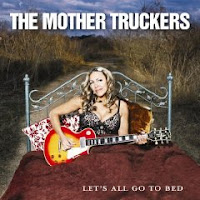 The Mother Truckers are back with their third CD, Let's All Go To Bed. The thirteen song set offers us a heavy dose of rock n' roll that often makes you forget The Truckers have frequently been described as a country-rock band. Even the quartet's official web site doesn't believe they are a country band because it brands them as "a kick-ass rock 'n' roll band from Austin, Texas." As their high octane music moves further and further away from country with each succeeding release they sound tighter and more alive than ever before. Teal Collins excellent, full throttle vocals wail, Josh Zee's electric lead guitar scorches, and the new rhythm section of drummer Dan Thompson and bassist Danny G. provides a backbeat that would make any rock band proud. Call them whatever you want: rock, country, or Americana. Fans of all those genres will find something to love on this excellent collection. One of the new CD's strongest tunes, "Streets Of Atlanta," would be a perfect vehicle for The Rolling Stones if Mick Jagger was the the frontman instead of songwriting partners Zee and Collins. The duo wrote all of the songs on the album except for Billy Joe Shaver's "When I Get My Wings."

I've written about The Truckers two previous CDs and all three are worthy. However, if you only buy one Let's All Go To Bed should be your choice.

As good as The Mother Truckers studio work is the best way to experience them is live in all of their blazing glory. The first time I caught them in concert was in October 2007 at Austin's Continental Club, their home base for many years. Last week, on what I believe is their first tour East, I had the pleasure of seeing them again at Bethlehem, PA's famous Musikfest. Could this tour mean they are finally starting to get the national recognition they so richly deserve?