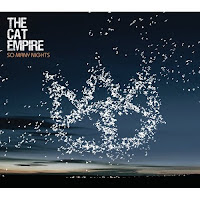 Those Australian mates known as The Cat Empire are a hard bunch to categorize because there is nothing traditional about their rock n' roll. The band's best known CD, Two Shoes, did not have a single guitar lick on the entire sixty minute disc. A solo trumpet is one of their featured lead instruments, and on their latest CD, So Many Nights, they may be the only band featuring a turntable accompanied by a string section. They also are lucky to have keyboardist Oliver McGill who is possibly the best unknown jazz-rock pianist in the business. Every solo he plays is absolutely amazing.

So Many Nights is a party disc that is just as much fun as the sextet's earlier work. It's also a little more traditional in both its songwriting and arranging without sacrificing any originality or quality. There are even a couple of tunes that someone may want to classify as ballads. The band offers us a taste from a full buffet of musical genres, including pop, rock, funk, jazz, reggae, ska, even some light hip-hop, frequently jumping styles in the same song.

So Many Nights does have a little acoustic and rhythm guitar added for flavor but the most important and influential rock instrument of all time is still never featured as a lead instrument. The Empire Horns, the band's unofficial part time horn section, are joined this time around by the just as unofficial Empire Strings. The point of all of this detail is that from track to track you will never know what musical surprise is coming your way next, and despite what may sound like a messy hodge-podge of songs, the band still manages to provide the listener with a unique sound that is totally identifiable as The Cat Empire.

Primary lead singer Felix Reibl's compositions are superior to those of alternate lead singer and trumpeter Harry James Angus. He is a better vocalist too. Reibl's title track is getting some deserved radio airplay. At fifteen songs the CD is a little too long, but overall, So Many Nights is another fine effort by a unique band that deserves the success that is coming their way.