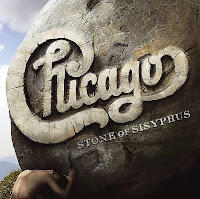 It finally happened. The cross-generational band Chicago have finally issued their previously unreleased Stone Of Sisyphus (SOS) sessions from 1993. It's an honor that belongs to Rhino Records.

My view of these songs is very much the same as it was when I first heard them four years ago. The music is far better than anything Chicago released during their Warner Brothers years with the possible exception of 1982's Chicago 16. However, SOS does not rank with their classic albums from the seventies. So, why am I writing about SOS again? The answer is mostly to point out the differences between the unofficial version many fans have owned for years and the new Rhino disc hitting the shelves this week.

Most importantly, and shamefully, one of the songs originally slated for release on the CD back in 1993 has been eliminated. "Get On This," composed mostly by former band member Dawayne Bailey, was dumped. Is it because the song is arguably the most lyrically controversial and loudest track the band ever recorded? Is it because the song doesn’t fit in with Chicago’s dual images as a power ballad fiasco and a feel good oldies act, or is it because it’s composer was let go from Chicago through a bitter divorce as Bailey and a host of others suggest? If for no other reason the track should be included on the album because it was part of their original artistic vision when they recorded it back in 1993.

The other big change is Rhino’s re-sequencing of the first three tracks. This allows the title song to jump start the disc and that is a very good thing because it’s one of the album’s highlights. It should be noted that "Stone of Sisyphus" is also primarily a Bailey track and it’s far more accessible and mainstream than "Get On This." Jim Pankow’s very cool horn break late in the song is bolstered by the fine lead vocals of Robert Lamm on the verses and Bailey on the chorus.

There are also four demos included as bonus tracks. Rhino’s earlier re-issues of Chicago’s classic Columbia catalog prove that in their case the bonus tracks are almost always unnecessary.

The CD also has brand new art work with extensive liner notes. Both covers have their merits but are starkly different. The new official version is a glossy, high tech, modern day painting. The unreleased original is a sketch that Bailey had a hand in designing.

Will anyone who is not a devoted Chicago fan be interested in hearing, let alone purchasing, the new Stone Of Sisyphus? I don’t have an answer to that. I'm also not sure that I’m going to bother throwing down my hard earned cash to buy it because, in true Chicago style, their original artistic vision has been tampered with for motives that are not totally clear.

You can see my original SOS review with it's original cover art here.
Chicago Classic Rock