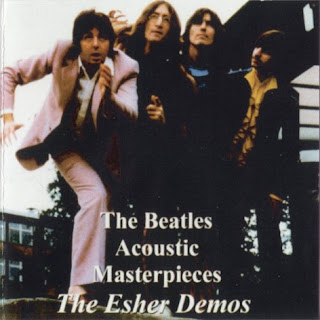 Hardcore Beatles fans already know that most of the band's 1968 double LP, The Beatles, (the masterpiece more commonly known as The White Album) was written in India when all four band mates visited there to study with the late Maharishi Mahesh Yogi. The White Album would be their first real LP since Sgt. Pepper’s Lonely Hearts Club Band was released in the spring of 1967. In between Pepper and The White Album was the TV show Magical Mystery Tour, whose songs were released in the U. K. only as an EP on a double 45 RPM set. In America the songs from the TV show were combined with several tracks from the Pepper era that were previously released only as singles to form a whole new LP.

After the group’s return from India the band’s three composers, John Lennon, Paul McCartney, and George Harrison, convened at Harrison’s house in Esher in the south of England to informally demo their new songs to each other for the upcoming recording sessions. All three recorded their own songs, double tracked, using Harrison’s reel-to-reel home tape recorder. The double tracking enhances the songs a bit by adding a second vocal, additional guitar work, and even some light percussion. The sound quality varies from passable to very good, and while sometimes the performances are a little rough, the music is never less than listenable.

Lennon started things off with "Cry Baby Cry." He then moved on to the now familiar melody to "Jealous Guy," a tune that became one of his most beautiful ballads. The finished song eventually found a home on his landmark Imagine album, but here, at rehearsals, it had totally different lyrics. Originally titled "Child Of Nature" this early rendition opens with the line, "I’m on the road to Rishikesh" which gives you an idea of what it is about. He also debuted "I’m So Tired," "The Continuing Story Of Bungalow Bill," Julia," and "Sexy Sadie." There are acoustic versions of "Dear Prudence," "Yer Blues," "Everybody’s Got Something To Hide Except For Me And My Monkey," "Revolution" and the awful "What’s The New Mary Jane," a song that fortunately was never finished and finally surfaced many years later on Anthology 3.

Harrison went next. "While My Guitar Gently Weeps" is similar to the version that appears on Anthology 3 and it's easily just as wonderful in an acoustic setting. The host also previewed "Piggies" and "Not Guilty." The latter song was finished with a fine electric arrangement but for some reason it was left off the album at the last minute. It was never officially released until it found a home on his self-titled solo album from 1979. The Beatles final version appeared much later on Anthology 3. Harrison also played two other songs that didn’t make the album, "Circles" and "Sour Milk Sea."

McCartney was the last one to show off his new stuff. "Blackbird," "Rocky Raccoon," and "Mother Nature’s Son" suit the acoustic format perfectly, and they aren’t radically different from their officially released versions, but an all acoustic and lyrically unfinished "Back In the USSR" eventually evolved into a very different song. McCartney also played "Junk" which didn’t see the light of day until his debut solo LP two years later. There is also an early take of Ob-la-di Ob-la-da.

I have no idea if the three Beatles got along well during this historic session but we all know that by the time the real recording began the turmoil and resentment within the band began to boil over and, despite making great music for a little while longer, the end of The Beatles was near.

You can read more details about The Esher Sessions and a complete track listing, in proper sequence, here.