Temples of Sound: Inside the Great Recording Studios - Jim Cogan and William Clark (2003) 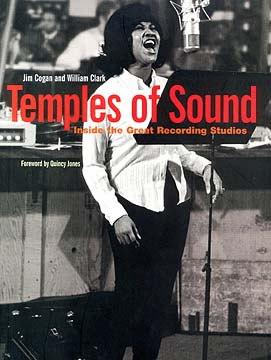 Temples Of Sound is a great book! I delved into it gradually during my spare time over a period of a year, and even re-read much of it on a recent vacation because I read the first parts of it so long ago. Temples Of Sound offers the reader fifteen chapters about the great American recording studios, how they came to be, how they rose to their great heights, and where they are today.
Most of these studios began in the 1950s or early 60s but others, including Miami's Criterion Studios and Philadelphia's Sigma Sound Studios came to prominence in the 70s.

The intriguing thing about this book is that no matter what kind of music was recorded in these "temples" there seemed to be one common factor among most of them. Many of the great studios were started from scratch by young entrepreneurs who were naive about the music business. Most of the studios were makeshift in nature, housed in stark old buildings that frequently needed massive rehabilitation, and built on tenuous economic circumstances. Most of the recording engineers, who you will find out are more important characters in shaping these places than many of us realized, improvised and learned their craft on the fly as they recorded some of the biggest hits in American pop music history.

Great stories abound. Nat King Cole's popularity was almost singlehandedly responsible for the rise of Capitol Records. We witnessed the second-coming of Frank Sinatra and how he and Nelson Riddle made some of the world's most loved vocal and orchestral records together. We were with Brian Wilson as he created his masterpiece, Pet Sounds in a small cramped studio. We visited Sam Phillips as he put together one of the most famous and influential labels of them all, Sun Records. The story of Berry Gordy's Motown Records is one of the most fascinating. The rise and fall of Stax-Volt is another. Ahmet Ertugen, Jerry Wexler, and their Atlantic Records empire are deservedly chronicled here as is Van Gelder, New Jersey's great jazz studio.

One of the best examples of how many of these studios improvised as they went along occurred at Sigma Sound. Whenever anybody used the soda machine in the hall outside the studio it would create an audible buzz in the control room that could be heard on the records. Because no one was able to find the cause of this problem a red light was installed on the machine that would automatically turn on when a recording session was taking place warning anyone so inclined not to use it.

The only quibble I have regarding the book were the discussions about the equipment used at particular sessions. Most readers will not know, nor understand, the nuances of a specific brand of microphone in relationship to another, nor do they care. This technical talk is not for everybody but that is only a small part of each history.

Author William Clark writes for TV and is a playwright and songwriter. His co-author, Jim Cogan, is a recording engineer who has overseen many great jazz recordings. Quincy Jones wrote the foreword.

Temples Of Sound is strictly about the great American studios. Don't expect anything about The Beatles, Abbey Road, or any other British artist unless they recorded in The United States. Cream recorded for Atlantic and Australia's Bee Gees worked at Criterion.

Those of you interested in the history of pop music, and how many of the greatest hits of all time were born, need to read this book.
Jazz Motown Music Books and Magazines Rhythm and Blues Rock 'n Roll Vinyl Moments