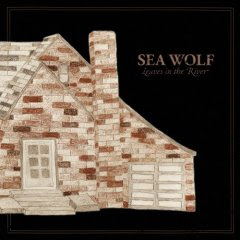 Sea Wolf's first full length CD, Leaves In The River, is one of 2007's best and therefore it's not surprising that two of it's songs, "Winter Windows" and "You're A Wolf," are in heavy rotation on adult alternative radio. The band, named after a Jack London novel, follows in the steps of artists such as Five for Fighting, Iron & Wine, and World Party, meaning they are essentially the work of one singer-songwriter who organizes a band to record and play music as needed to satisfy his current muse.

Before you consume even one line of the lyrics on this CD you'll be immediately taken in by the melodies, vocals, and instrumental arrangements of Sea Wolf's mastermind Alex Brown Church. Intentionally or not he and producer Phil Ek crafted this CD to sound like Justin Hayward of The Moody Blues singing lead for another band that Ek produces, The Shins.

Rock n' roll is not supposed to be pretty but it seldom sounds prettier than Leaves In The River. However, don't let the music fool you because the arrangements hide the seriousness, and often the darkness, of the songs. Lyrically "Winter Windows" is anything but pretty. It's about a suffering, dysfunctional man attempting to survive a suffering, dysfunctional family. The protagonist of "Black Dirt" is bleeding and dying in the street after being shot by someone who is probably an angry lover. The meaning of You're A Wolf" is obscured by its own lyrics. Church may consciously be making music that contradicts the tone of his lyrics in order to make the songs more accessible. Otherwise the weight of his words may be too heavy for some listeners.

I hope that Church is a happier person than his songs indicate. It would be a shame to listen to him suffer like this on future releases. Even so, this is a fine work from a newcomer who has the potential to be a master at what he does.