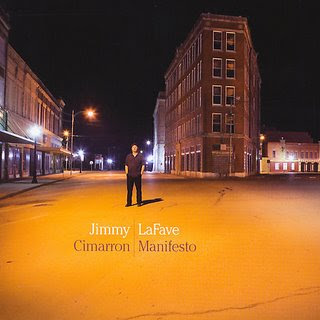 I learned a long, long, time ago that there is no correlation between how much talent musicians have when compared to the amount of radio airplay they receive and the amount of concert tickets and CDs they sell. Such is the case with veteran rocker and singer-songwriter Jimmy Lafave who, unfortunately, is not very well known beyond his Austin, TX base of operations. I heard great things about Lafave after arriving in Austin so I decided to take in his performance at one of the city's premier music venues, Threadgill's of South Austin, on Saturday, October 27, 2007. Despite his relative anonymity this gentleman of song is highly regarded in the music world. He has even opened for one of his fans, Lucinda Williams.

Lafave's music is a combination of folk, country, blues, and rock. He and his band can easily spread their musical wings over any of those genres. His band at Threadgill's included John Inmon on electric guitar and Radoslav Lorkovic on keyboards. The Croation Sensation, Lafave's nickname for Lorkovic, is superb on the Hammond B-3. The band was rounded out by Glenn Schuetz on both electric and acoustic upright bass. Lafave played acoustic guitar. Their drummer was MIA but the band rocked anyway so his absence really wasn't noticed. I've heard backing bands for many well known musicians who aren't this interesting. Some regulars in the audience thought highly enough of Inmon to request that he showcase his talents with a version of the Jimi Hendrix/Derek and The Dominoes gem, "Little Wing." The band complied and Inmon played the song as if it was his own.

Lafave has an easy, laid back rapport with the audience, adding humor and some good stories along the way. His love for music and his fans are genuine. While his voice can not be considered strong it is never less than appealing and it complements every song very nicely.

Lafave's seventh CD, Cimarron Manifesto has a sampling of everything he does best as a songwriter. Highlights include "This Land" in which Lafave laments that he wants his "country back" after all that has gone wrong in our post 9-11 world. "Car Outside" is about a poor guy who can't stay with his lady because of his wanderlust yet he knows what he'll be losing as soon as he walks out the door. "That's The Way It Goes" is a clever rocker that uses fictional rock song characters as a metaphor for people who either sold out, grew up, or lost their heart after sowing their oats. He sings:

"What ever happened to Johnny B. Goode
He pawned his guitar like I knew he would
Started working for the CIA
Hasn’t been seen to this very day
Just so you know
That’s the way it goes

I went looking for Peggy Sue
I found her up in Abilene
She’s working as a waitress there
At the Dairy Queen
Sweet Lorraine, let the party carry on
Lucille, get back where you belong
Hello, Mary Lou, goodbye heart
They’re working the night shift at the Super Mart
Just so you know
That’s the way it goes

Lafave possesses impeccable taste in cover versions. Bob Dylan is one of his major influences. On Cimarron Manifesto he covers "Not Dark Yet" from Dylan's 1997 release Time Out Of Mind. There is a very nice rendition of Donovan's "Catch The Wind," that he also sang at Threadgill's, and a soulful arrangement of Joe South's "Walk A Mile In My Shoes."

Inmon also has a great reputation in Austin. Several times Lafave very pointedly dropped his name in the same sentence with Stevie Ray Vaughan's. Inmon has played with Townes van Zandt, Jimmie Dale Gilmore, Joe Ely, Delbert McClinton and many more. Find out more about him on his website. He, Lorkovic, and Schuetz are among the sidemen who make Cimarron Manifesto one of the top CDs of the year.

It's time that Lafave gets a big break, goes national, and becomes a star.
Austin Country Folk Jimmy Lafave Singer-Songwriters