FIFTH IN A SERIES FOR WXPN'S 885 MOST MEMORABLE MUSICAL MOMENTS

Today, Sunday, August 12, 2007 is the 130th anniversary of the phonograph. To celebrate this worthy occasion on Vinyl Record Day a group of bloggers have agreed to share some of their vinyl memories. This endeavor was organized by one of the very best music blogs on the web, The Hits Just Keep On Comin', where you will find a complete list of all the participating bloggers. This homage to vinyl just happens to coincide with WXPN's 885 Most Memorable Musical Moments listeners poll so this article will be my contribution to both projects.

First, I want to salute something that really isn't a moment at all even though it is truly memorable: "His Master's Voice," the trademark of RCA Victor Records for almost a century. It was simply the best record company logo ever designed and it appeared on all of RCA's record labels.

Nipper was a real dog who lived in Liverpool, England in the 1880's. He used to do exactly what his master's painting depicted here because the dog was fascinated with the human voice emanating from the large cone-shaped speaker. The painting eventually caught the eye of an RCA executive and the rest is history.

By the end of the 80s RCA Records went into decline. They were eventually absorbed by Sony BMG and Nipper was retired. RCA's consumer electronics division continued to use "His Master's Voice" as a trademark but today most people who grew up in the digital age are probably unfamiliar with this relic of the vinyl era. 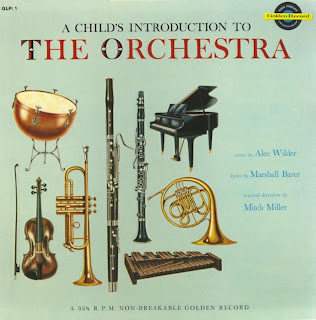 I'm sure I didn't know who Nipper was when my Mother gave me A Child's Introduction to the Orchestra, (Golden Records GLP-1) as a gift, probably in 1958, the year it was released. It was my first 33 1/3 RPM record and for a few years it was the only album I owned. I played it regularly along with all of my children's 45s and I loved it.

Each instrument was introduced by a male or female singer whose voice was a suitable representation of the instrument. The lyrics for each song directly pertained to how it was played and it's place in the orchestra. Each piece usually ended with a solo by the featured instrument. The album opened with "Antoinette the Clarinet" followed by "Newt the Flute." Some of the other titles included "Max the Sax," "Lucy Lynn the Violin," "Nola the Viola," and "Mike Malone the Slide Trombone."

This very educational record lived up to its title. For instance, we learned that the clarinet has more notes than any other instrument in the orchestra. Side 2 ended with a very short symphony. A narrator taught the listener how each of the four movements were related to each other.

The music was composed by Alec Wilder. The orchestra was conducted by Mitch Miller.

Learning all about a symphony orchestra didn't stop me from listening to the electric guitar crunch of bands like Led Zeppelin when I got older but the album went a long way in sparking my interest in lots of different genres of music. It was also the reason I played the clarinet for a few years after I became old enough to take lessons.

At such a young age I was too young to properly care for an album so as time went by the disc clearly showed its age. My last memory of it isn't pretty and the record has been gone for many, many years. I don't know what happened to it. However, after a diligent search on the Internet I found it on a website where the complete album can be heard for free.