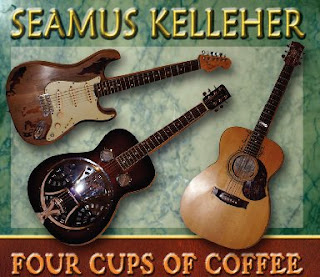 I'm sure most of you have never heard of Seamus Kelleher. I wrote about him briefly last year when I reviewed Push & Pull, the latest CD by his Celtic rock band, Blackthorn. Kelleher is an Irish immigrant who, for the last twelve years, has been the lead guitarist for the quintet who may be Philadelphia's most popular unsigned rock band. In concert Blackthorn plays rock versions of Irish folk music, covers of Irish rock standards, and songs from their three independent CDs of original material.

As with a lot of musicians, who play very important but supporting roles in their respective bands, Kelleher felt a need to express himself more fully outside the framework of his group's proven formula. This led the guitarist to pursue his dream of recording a solo CD, Four Cups Of Coffee, that was recorded over a four day period this past April in Nashville.

Four Cups Of Coffee is an eclectic mix of styles that reflect all of the varied influences that make up Kelleher's taste in music. First, the guitarist is obviously a blues fan. He includes covers by Irish guitar legend Rory Gallagher, bluesman Elmore James, and the self-penned title track.

Secondly, we find that Kelleher is also a singer-songwriter. Two deeply personal originals, "My Friend Ben" and "Missing My Hometown" reveal Kelleher's sensitive side. Best of all is "September Skies," a truly wonderful song about 9/11 in which the singer and his neighbors worry about who is not coming home from work that awful Tuesday. Kelleher lives in North Jersey and his town, Cranford, lost six people when the Twin Towers came crashing down. According to the song, the abandoned cars parked at the local train station emphasized the sad fact that their friends and loved ones would never be returning home again.

Finally, the former Galway native really shines on five acoustic instrumentals. Kelleher's roots are most obvious on these original tunes. Tin whistles, accordions, and mandolins appear in abundance on these fine folk arrangements. "Spanish Lady" is top notch finger-picking while "Nashville Ceili Band" makes the case that country music's seeds were planted in the Emerald Isle long before the genre a found a home in Music City.

Kelleher says there is a variety of stuff on the CD because it's an honest piece of work full of music he loves. He understands that some critics may not be enamored of an album of music that jumps from genre to genre but that kind of criticism is only justified if the artist does not produce quality work. Fortunately Four Cups Of Coffee proves that Kelleher is talented enough to play any style of music that motivates him and play it well.