The Young Dubliners - With All Due Respect, The Irish Sessions (2007) 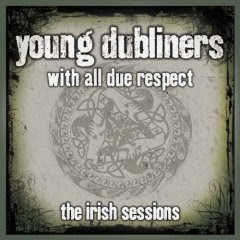 Irish bands love to embrace their roots. The Young Dubliners, a Los Angeles based Celtic rock quintet, are back with an album of fired up arrangements of traditional Irish folk songs and cover versions of more modern fare from Irish rockers like The Pogues.

With All Due Respect, The Irish Sessions is a joyous romp through music the band truly loves played in the style of an uproarious Irish pub rock band. The Irish Sessions is mostly fast and loud and it sounds totally Irish because the tin whistles and uilleann pipes fit in easily with the usual rock band lineup. Keith Roberts' band has always been a hard rocking outfit whose anthemic rock is spiced with just enough bar band and punk sensibilities (as their love of McGowan proves) to avoid sounding too cliched.

This album is one giant Irish party from start to finish. It will make people who can't dance want to stomp their feet and even make teetotallers imbibe some Guinness. It's been a long time since I've heard a rock album that is this much fun.