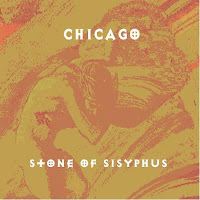 Stone of Sisyphus (SOS), the infamous, mysterious, unreleased, and widely bootlegged CD from Chicago recorded in 1993 is a major improvement over their 1980's escapades into male diva territory. It is great to see the band taking pride in their work again, but despite claims on the Internet that this lost album ranks with their greatest and most renowned works one should take note: Stone of Sisyphus is not the second coming of CTA. How could it be? Jimi Hendrix’s idol, Terry Kath, is long dead, and the wildly interesting times that both spawned and had a major influence on their early music are gone with him.

That said, SOS is their best and most eclectic set of original songs since their mid-70s heyday. It offers a mix of styles in which the band tries everything. The title track and "Get On This" are loud, straight-ahead, 90s arena rock primarily written by and featuring their former guitarist Dawayne Bailey. The latter song offers some of the most off the wall lyrics ever recorded by Chicago, including a line about Jesus kissing the Devil. The title track is one of the highlights of the album. There is Peter Cetera like balladry that is best exemplified by bassist Jason Scheff’s "Bigger Than Elvis." The song is a very nice tribute to his father, Jerry Scheff, who played bass with Elvis Presley for many years. There is a lot of R&B influenced rock, most of it from the pen of Bill Champlin, and a Robert Lamm song, "Sleeping In The Middle Of The Bed Again," that is heavily influenced by and is almost rap-like in its arrangement. Some of this stuff works and some of it does not.

The horns appear on all twelve tracks and are often prominent in the arrangements, but they never "drive" a track as they once did, and just as often they seem to be mere ornaments added to a song just to prove to us this really is Chicago. However the only time the horns are passed over completely in favor of synthesizers, as they were in the 80s, is the synth "sax" solo weaving its way all through Scheff's "Let's Take A Lifetime." Why the band finds it necessary to do things like this when they have a fine woodwind player, Walt Parazaider, in their midst is a mystery to me. Synths and other electronic keyboards frequently replace electric lead guitar. Lamm’s piano, if present, is buried deep in the mix. Scheff too often screams his vocals in order to produce an emotional, dramatic effect that in the end only sounds like the screaming it really is. He is much better when he sings in his natural voice.

On the plus side, the best composer, as usual, is Lamm and his offerings prove, at least artistically, that the band should have allowed him to compose the bulk of the material over the years. His "All The Years" is an outstanding song that is the only reminder of CTA and his semi-rapper mentioned above is a surprisingly accessible entry. The entire original horn section, still led by James Pankow’s arranging, sounds great (they always have).

Rumors abound as to why SOS was never released but I don't believe all of the reasons have ever been made public. SOS is better than most of what is played on commercial rock radio these days but it remains an interesting, but overrated, underground legend to this day.