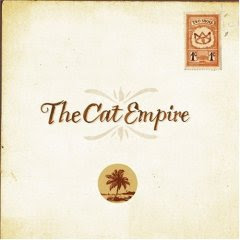 The Cat Empire, from Melbourne, Australia is currently all the rage in their homeland. Two Shoes, which went double platinum in the land down under, was recorded in Havana, Cuba in late 2004 at the famous Estudio Egrem where The Buena Vista Social Club laid down many of their tracks.

It's not easy to label The Cat Empire. The band plays a lot of ska and reggae, a little hip-hop, and they even work a turntable into their act, but where Two Shoes really shines is with their excellent Latin jazz arrangements. If you must apply a label to the Aussie sextet call them a rock band even though there is nothing traditionally rock 'n roll about them. There is no guitarist on the album but there is a three piece Cuban horn section.

The Cat Empire are not only versatile composers they also write imaginative lyrics. The CD opens with these great lines from the song "Sly": If frizzy hair was a metaphor for festival time/Then this woman is a goddess of that festival shrine." Their lyrics can be both humorous and full of social concerns.

In addition to "Sly" other highlights include "The Night That Never Ends" that begins with a slow Dixieland jazz chart and ends with a rousing Latin brass band chorus. As good as the whole disc is nothing tops the pure Latin jazz of "Sol y Sombra" highlighted by keyboard player Olliver McGill's outstanding two minute jazz piano solo that is the heart of the song and the best thing on the CD. "The Car Song" is another standout.

I normally do not list band personnel but an exception is made here just so you can get a better idea of what these guys are all about. The Cat Empire members are:

Two Shoes was not yet released in The United States when word of mouth got them booked at last year's Bonnaroo festival in Tennessee. The disc appears to be finally getting noticed in America in 2007 but not before they released their followup, Cities, that is available on their website.