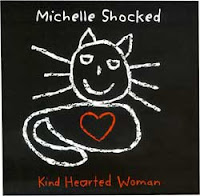 There is an unusual history behind Michelle Shocked's very hard to find CD Kind Hearted Woman. I accidently stumbled across it last week in the $2.99 section of the finest used CD store I've ever had the pleasure of shopping in, the Princeton Record Exchange. Someday I'll have to post an article about this great place to buy music and try not to make it sound like a commercial.

Kind Hearted Woman was the first CD Shocked recorded after the demise of her contract with Mercury Records. It was originally issued as a limited edition in 1994 and was only available for purchase at her live performances. It was officially released in October 1996 and even then the album did not get wide release.

The original CD featured Shocked as the only musician. After playing it on the road for two years she went back in the studio and rerecorded it with Fiachna O'Braonain and Peter O'Toole, two members of the Irish band Hothouse Flowers. Producer Bones Howe was at the controls.

Kind Hearted Woman is not for casual fans. I have always loved Shocked, and while this disc is a departure for her (devoted fans will tell you every one of her CDs is a departure) it is by no means an inferior work. The singer-songwriter's often present sense of humor is nowhere to be found. Most of the songs are about the hard life of the farmers and working class people of the rural deep south. The album's dark tone is set on the first track. "Stillborn" threatens to engulf us with a Yoko Ono type wail that is relevant to its subject matter but fortunately Shocked's vocals never quite succeed in crossing over that line. The good news is her singing and arrangements are far more conventional over the remainder of the album.

The cover of the original CD was white with a black cat but the official 1996 version, seen here, is black with a white cat. Shocked wrote in her liner notes, "About the smiling cat: Back in the days when hobos used to ride the rails they had a vocabulary of symbols that let each other know what to expect when they came to a strange town. For example a circle with crooked arrow through it meant a 'squat' or abandoned building. A cat with a smile and a heart chalked on a fencepost or pavement meant in that house lived a kind hearted woman who might offer a warm meal, an odd job, a place to sleep for the night. You get the idea." Her quote provides a lot of insight regarding the music on the album. The cat appears to be inspiration for the second track, "Homestead."

In addition to Amazon the CD is available for $15 plus shipping through Shocked's website. Don't look for it at any conventional retail outlets.
Folk Michelle Shocked Singer-Songwriters