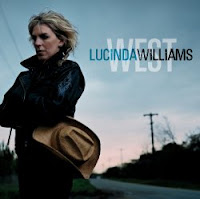 Candidates for my top five CDs of 2007 are arriving early this year and West, the latest CD from Lucinda Williams, is most assuredly going to be among them. Williams has always been one of my favorite singer-songwriters and, while she may never again make another record as great as the almost perfect Car Wheels On A Gravel Road, this is her best set of music since her 1998 landmark CD.

There isn't much rock 'n roll on West so if you're expecting the full-bodied sound of the electric band featured on Car Wheels you may be dissappointed. Most of the music is mellow singer-songwriter fare that is less produced and rehearsed than her perfectionist nature normally permits. This forces her always literate songwriting to take on even more importance than ususal. In many instances on West, the lyrics are the song.

As always Williams sings about what is on her mind, be it loneliness, a lost lover she misses and looks upon with fondness, and on "C'mon" she rants about another lover that she can't stand the sight of anymore. It's an even angrier rocker than her concert favorite "Changed The Locks." Two ballads inspired by her mother's death, "Mama You Sweet" and "Fancy Funeral" rank with her best writing.

The few rock songs may be weaker than usual but all the ballads are extremely strong and they make West another must own Lucinda Williams CD.