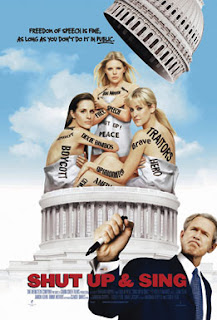 Shut Up & Sing is the feature length documentary about The Dixie Chicks that was released to theaters in the fall of 2006 and on DVD in January 2007.

The cover on the box of the DVD has the following pronouncement: "Freedom of speech is fine, as long as you don't do it in public." So for those of you who are squeamish of free speech when the perpetrators are liberals here is your warning: Do not open this DVD. If you do, and you don't like what you find inside, don't blame me.

In many ways Shut Up & Sing is like so many other documentaries on the lives of working musicians. The film alternates between shots of live in concert performances, clips of the band recording in the studio, in business meetings, backstage before and after their concerts, and at home with their families.

Not a single performance of a complete song is to be found anywhere, and to me that has always been a major flaw with most documentaries on musicians, but this film is not about the music. It's about the reaction from all sides to lead singer Natalie Maines' infamous quote made from a stage in England, "Just so you know, we're ashamed the President of the United States is from Texas."

After the comment, shown early in the movie, we witness the backlash, the protests, radio station programmers refusing to play the Chicks' music, and the ridiculous cries of "traitor" from many misquided former fans who don't understand what the First Amendment means. We witness Martie Maguire's fear of going onstage after receiving death threats and the defiance of Maines grow stronger as the noose tightens around the band.

You should not expect anything exceptional about the cinematography, film editing, sound, or music, in Shut Up & Sing. You should expect to ride an emotional roller coaster regardless of your political views because, despite its slant in favor of The Dixie Chicks, the film has enough guts to make both sides angry.