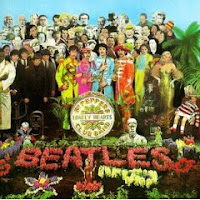 Just like a lot of people will do this year I'm revisiting The Beatles' classic Sgt. Pepper's Lonely Hearts Club Band as it approaches it's fortieth anniversary on June 1, 2007. Most will probably just gush over the album but I'm hoping to view this masterwork from a unique perspective.

Sgt. Pepper has often been considered both the greatest and the most important album of the rock era. Many polls conducted by music magazines over the decades have consistently placed it at the top of their lists. However a few more recent polls have seen the album lose some of its hold on music fans. As an example, the listeners of adult alternative radio station WXPN in Philadelphia conducted a poll in October 2005 and voted it the number two album of all time behind Abbey Road. Other albums that placed in the top ten by the Fab Four were Rubber Soul, Revolver, and The Beatles, (a.k.a. The White Album).

The luster of Sgt. Pepper has worn off for me over the years and all of the albums mentioned above, with the possible exception of Rubber Soul, hold a stronger place in my heart than the landmark Pepper does. Don't get me wrong, the album still ranks among The Beatles greatest works but, as time goes by, I find that it is one I love more with my head than my heart, and as I will discuss shortly, in the twenty-first century, even it's importance may be waning.

Many of the album's thirteen songs are pop masterpieces, the eclecticism and originality The Beatles exhibited on it were unprecedented. "A Day In The Life," complete with it's off-kilter forty piece orchestra still amazes me as does George Harrison's sitar driven "Within You Without You." While all of the songs on the album are worthy in their own way I have come to believe over time that despite it's greatness and historic impact that Pepper's songwriting is not as strong as on the other albums mentioned above. It's more a work of great arranging and production than it is a collection of great songwriting and, in the end, that is what elevates the quality of their other LPs. The lesser produced albums mentioned above don't use as much knob turning, tape splicing, and magic tricks as this classic employs and therefore the songwriting and vocals play a much more important part on every one of them, and to me it was songwriting and vocals that provided The Beatles a unique place in most people's hearts.

Sgt. Pepper changed the way most people listened to music. Prior to it's release most pop and rock music fans bought 45 RPM records and listened to Top 40 radio almost exclusively. Pop LPs were mostly just another marketing tool used to sell music. Most albums contained two or three hit singles and eight to ten songs that were mere filler. Until Pepper rock albums were not considered works of art. Sgt. Pepper almost single handedly changed the musical landscape and upped the ante for anyone else wanting to make records.

The Beatles felt that putting previously released singles on albums and forcing the fans to pay for the same music twice was unfair. That is why "Penny Lane" and "Strawberry Fields," two songs originally meant for the album, were excluded after EMI released them as the A and B side of a single in February 1967. Therefore Sgt. Pepper had no singles to generate sales and this meant that the album had to be strong on it's own merit. Fortunately it was.

I said earlier that today Sgt. Pepper's importance may be waning. Digital downloading may be affecting both its influence and importance. Downloading has turned many younger music fans back into consumers of individual songs. Fading quickly is the day when someone will buy a whole album to get the three songs they like while hoping there is some other worthy material on it to justify their purchase. Today, instead of paying upwards from $15 for the privilege of buying a whole CD, it is possible to go online and pay just 99 cents each for the three songs you like and ignore the rest.

Even the album cover was a huge production. The Beatles put almost as much work into it as they did the music. While CDs may have diminished the importance of album cover art the ipod completely eliminates any need for record album covers, CD jewel boxes, and liner notes.

Time marches on. While it's music will always be with us I wonder if everything that made Sgt. Pepper both great and hugely significant will vanish from the landscape. As the baby boomers age and become less influential, and as new musical forms develop, and new technology continues to evolve, what will people think of Sgt. Pepper’s Lonely Hearts Club Band in the future?