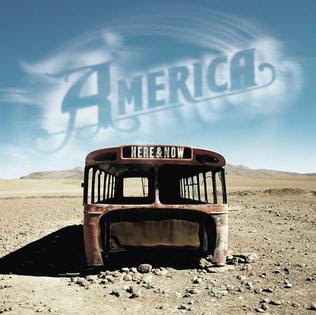 America, one of the most successful and famous soft rock bands of the 70s, is back with their sixteenth studio album, Here & Now. Original members Gerry Beckley and Dewey Bunnell (who are two thirds of the original trio) stay true to their trademark sound while injecting new life into the music by working with some prominent names of the current alt-rock and modern rock communities.

America was one of the many bands who forgot their roots and fell prey to the synthesizer craze of the 80s, but older fans will easily and happily embrace Here & Now. The new CD has more in common with their mid-70s middle-of-the-road music than it does with their first two albums, the 1971 self-titled debut and its followup, Homecoming, released a year later. Those two LPs featured songs and arrangements that were heavily accoustic in their foundation yet went well beyond the light fare most soft rock albums offered. The trio's music became more pop oriented as the decade progressed but their fine singing and musicianship prevented their songs from becoming overly treacly.

Here & Now was produced by lifelong America fans Adam Schlesinger of Fountains Of Wayne and James Iha, formerly of Smashing Pumpkins. They used their talents to make a CD that never strays too far from America's classic sound. Alt-country bad boy Ryan Adams plays on one track, as does Ben Kweller. They cover My Morning Jacket's "Golden" with head Jacket Jim James, another fan, playing sideman. Ira Elliot and Matthew Caws of Nada Surf help out on a cover of their own "Always Love." One of America's contemporaries, Rusty Young of Poco, plays on two tracks. Young doesn't play on "Ride On," a song that sounds like vintage Poco, but Adams and Kweller do.

A live bonus disc makes this a double CD release. The second disc is a twelve song concert recorded in XM Radio's performance studios in October 2005. The show is almost a live greatest hits album but the concert also includes the forgotten country-rock gem "Don't Cross The River" and a harder rocking arrangement of "Sandman" that is different than the original from their debut album.

It seems, just as Burt Bachrach suddenly became cool when he teamed up with Elvis Costello, that America's critical stock has risen by working with the younger, cooler guys.