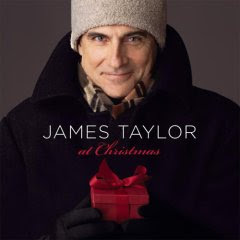 James Taylor At Christmas is almost identical to the Christmas CD Taylor released during the 2004 holiday season for Hallmark titled A Christmas Album. If you were one of the people who purchased it at your local greeting card store two years ago there is no need to buy this new release because only the artwork is significantly different between the two.

Hallmark's disc did not include the cover version of Joni Mitchell's "River" that used to be available for download on Taylor's website. "River" is included on the new album but "Deck The Halls" from the original Hallmark CD is not. The new album also includes "Have Yourself A Merry Little Christmas" that is not on the original. According to reviewers on Amazon there is now a third version, also on Columbia, including the missing "Deck The Halls" as a bonus track. If you have either of the first two versions you don't need the third but the last one has all thirteen tracks.

I don't know why Taylor's record company, Columbia, altered the track listing. Sometimes I just don't understand how the record companies do business.