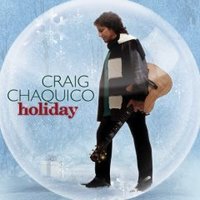 Fans of 80s arena rock may remember Craig Chaquico who was the lead guitarist for Jefferson Starship and also its later incarnation, Starship, the two bands that evolved from 60s San Francisco psychedelic icons Jefferson Airplane. Chaquico's best known song is probably Starship's "We Built this City." So considering his pedigree it may come as a surprise to discover that for over a decade Chaquico has forged a career as a respected new age and smooth jazz guitarist. Holiday, Chaquico's Christmas album released in 2005, finds itself easily straddling both genres. His rock 'n roll roots are never obvious anywhere on the album.

Musically Holiday is never less than pleasant and at the same time it is never anything more. A case can be made that this disc proves there is often no difference between smooth jazz and new age music. It's a good disc to listen to as background music or as part of a mix on your CD shuffle player.

Holiday is, except for one track, an instrumental album loaded with lots of electronic keyboards, electric and acoustic guitars, and drum programming. "Angels We Have Heard On High," "God Rest Ye Merry Gentleman," and "Jingle Bells" find themselves firmly rooted on the jazz side while two original tracks can not be considered anything but new age and are only Christmas music by virtue of such titles as "Every Day's A Holiday With You" and the fact that they appear on a Christmas CD.

Whatever opinion you may hold about Chaquico's music he must receive giant kudos for his charitable contributions to the music world. The biography on his website reveals the following: "Chaquico also performs nearly one free hospital concert a week (while on tour) on behalf of the American Music Therapy Association. His charity work is founded on the idea of returning the gift of music that was given to him when he was 12 years old while recovering in the hospital from broken arms, hands, wrist, foot, ankle and leg suffered in a car crash caused by a drunk driver. His doctor encouraged him to play his guitar."

In addition Chaquico is donating royalties from the last track of Holiday, "Nonesuch/Ladies' Bramzel," to a school in Oregon as his annual holiday gift. A teacher and students from the school contribute the only vocal on the album to that song. Find out more at the official Craig Chaquico website.